Sharp increases in both revenues and net profit as the infrared imaging specialist captures pictures of the Boeing 787 Dreamliner. 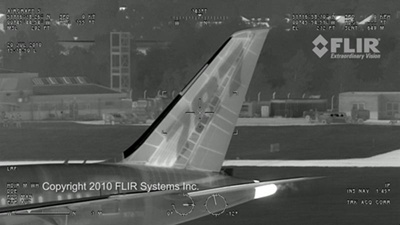 It has been a milestone week for FLIR Systems, the self-professed world leader in the design and manufacture of thermal imaging infrared cameras. Not only did the US company post impressive financial results for its second fiscal quarter of 2010, it also captured full high-definition infrared footage of Boeing’s highly anticipated 787 Dreamliner as the airplane made its first public flight at the UK’s Farnborough International Airshow 2010.

Breaking this down further, revenue from FLIR’s Government Systems division increased 5% from Q2 2009 to $167.9 million. Revenue from the Commercial Systems division increased 16% year-on-year to $136.0 million. Within the Commercial Systems' division, revenue from Commercial Vision Systems (CVS) increased 27% from the second quarter of 2009, to $64.7 million, reflecting strong growth in security, automotive and personal vision systems. Revenue from Thermography increased 7% from the second quarter of last year, to $71.4 million. International sales as a percentage of the total were the said to be at their highest level in four years.

Commenting on the performance of the Government Systems side of the business, the division’s president Bill Sundermeier told investors that while US order activity remains slow, strong international activity continued unabated with both order size and breadth increasing during the quarter. “Our established sales and customer support presence in numerous locations across the Middle East are key to our strong position in this marketplace,” he said. “Ground-based applications represented the majority of orders with airborne a strong second.”

Maritime recovery
Raymarine will be integrated into FLIR’s Commercial Systems division. The acquisition was attractive for several reasons, according to FLIR President and CEO Earl Lewis. “Raymarine dramatically expands our maritime distribution network which will enable us to sell more of our thermal imagers to this large and unpenetrated market,” he told investors. “Secondly, our distribution in the higher end commercial marine market will enable us to expand the breadth of Raymarine's products. And third, we believe the timing of this transaction to be very good. We may be in the early stages of a recovery in the maritime market.”

Andy Teich, president of FLIR’s Commercial Systems division, noted several successes. “CVS operating income for Q2 was $19.2 million, up 45% from the prior year and the highest in CVS history by far. Operating margins were also a record at 30%, up 4 percentage points from the prior year due to a favorable product mix, higher volumes and lower material costs.”

According to Teich, demand in the security and surveillance market was very strong and unit growth increased 70% compared with last Q2. Growth in the automotive segment also exceeded the company’s expectations. “In the first half of 2010, we shipped the same number of units as in all of 2009 and we expect 2010 volume to approximate the total that we shipped in 2008 and 2009 combined. In addition to our success with the Audi A8, Audi has added our camera to the A6 model, which we believe could significantly add to our unit volumes over time,” Teich told investors.

FLIR said that activity in Asia was strong in terms of thermography sales, while Europe was impacted by the current uncertain economic environment. China is now FLIR’s number-one market in Asia, with Japan and Korea being viewed as emerging territories. The company also hopes to open three or four regional offices in India over the course of 2010 and early 2011.

Financial results aside, FLIR took the opportunity to capture images and video footage of Boeing’s new Dreamliner at Farnborough. The images were taken with the Star SAFIRE 380-HD, which was launched as part of a new family of high-definition sensors earlier this week. The all-digital system offers up to seven simultaneous payloads, as well as full HD capability and 1080p/720p on all video channels. "We are thrilled to have captured footage of this historic flight with one of today's leading EO/IR systems," commented Lewis.