Report recommends a coordinated national photonics initiative and demands better economic data to support the case for funding it. 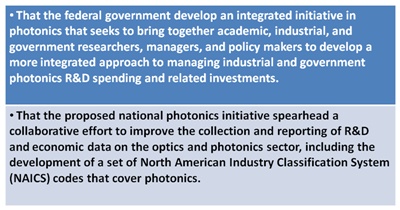 The long-awaited follow-up to the National Academy of Sciences' “Harnessing Light” report recommends that the US federal government sets up an integrated national photonics initiative, in order to better coordinate future development of the technology in the US.

Published 14 years after the initial report, which is widely acknowledged as highly influential, Harnessing Light 2 is the result of deliberations that have taken place over the past 18 months.

Entitled “Optics and Photonics: Essential Technologies for our Nation”, it makes a series of observations and recommendations that are intended to ensure that the US takes a lead role in shaping the future industry.

Arthurs' counterpart at OSA, Elizabeth Rogan, added: “This report lays out a specific vision for how optics and photonics technologies drive innovation and economic growth in areas as diverse as defense, biotechnology, communications, and manufacturing."

The study also identifies a set of “grand challenges” that optics and photonics technologies can help to address in its role as an enabling technology – echoing a similar approach already taken by the European Commission.

The suggestion recognizes that in a world where federal research budgets are shrinking, it is more important than ever to set up a co-ordinated effort, with funding from industry matched with that from government.

Another key recommendation by the NAS executive committee, which was co-chaired by former chief scientist for sensors at the Air Force Research Laboratory Paul McManamon and the University of Southern California’s Alan Willner, is that the photonics community in the US should collaborate to collect and report industry data on employment, photonics-related economic output and privately-funded research.

That could include developing a set of so-called “NAICS” (North American Industry Classification System) codes that relate specifically to photonics. Currently, there is no such system.

Armed with better information, the hope is that the widespread economic impact of optics and photonics can be better quantified and understood, and the importance of the technology sector to key industries such as defense, homeland security and energy can be communicated to the relevant federal agencies and funding bodies.

“The national photonics initiative should spearhead a collaborative effort to improve the collection and reporting of R&D and economic data on this sector,” recommends the report. The study’s executive committee, which included a number of distinguished economists, also points out in no uncertain terms that the current data that is available is below the required standard. 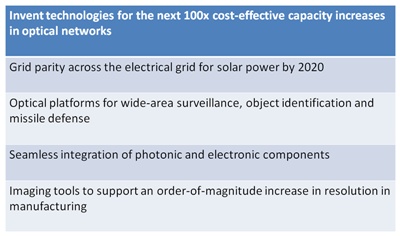 Grand challenges
The report also identifies a series of grand challenges that optics and photonics can be expected to play a critical part in solving. Discussions with technology giants such as Google, Apple and Facebook, whose business rely heavily on photonics – a Google data center requires as many as a million lasers to function, the NAS report claims – revealed major concerns of a bottleneck in networking speeds in the near future.

Internet bandwidth has grown by a factor of 100 over the past decade and, combined with the enormous energy requirements of data centers, it is clear that new technologies are needed to keep pace with the demand.

The report calls for the US to position itself as a leader in the optical technologies required for the future global data center business, with an emphasis on optical connections within and between those centers to allow capacity to scale.

Much of today’s internet infrastructure has its roots in technology developments made at Bell Laboratories in the 1970s and 1980s, as well as large, vertically integrated companies - and this is the kind of “critical mass” that the NAS wants to emulate with the idea for a national initiative.

In the energy field, the committee unsurprisingly identified cheap photovoltaics and high-efficiency solid-state lighting as twin targets – although the US Department of Energy has already made substantial commitments to those areas through its SunShot Initiative and long-standing efforts in solid-state lighting, such as the “L” Prize and its extensive “CALiPER” testing programs.

Other grand challenges include exploiting optics and photonics to greatly improve understanding of the human immune system, with the potential for a major impact on healthcare costs, the development of optical mapping techniques for biomolecular analysis, laser additive manufacturing, “beyond extreme UV” light sources for future lithography systems, and photonic integrated circuits for a variety of applications.

Taking the message to Washington
With the NAS committee now officially disbanded, the onus will be on the study’s sponsor organizations such as SPIE, OSA and NIST, to communicate the findings in a compelling way to US politicians and the various government agencies.

And while the report has been welcomed by the sponsors, there is also a realistic acknowledgement that enacting its key recommendation of setting up and funding a national photonics initiative will require a degree of political support that may be hard to come by.

The weight of influence carried by NAS will no doubt help those organizations to get their message across to the key players on Capitol Hill, acting as a “conversation opener” at the very least. But without hard economic data to hand, convincing them to take part in an effort that will need long-term and bipartisan support will be all the more difficult.

The committee’s task of assessing the impact of photonics on such a wide-ranging field of applications, as well as identifying a coherent set of actions to ensure its future, has been described as “Herculean”. But it is possible that the really hard work has only just begun.

• The NAS report and its findings will be discussed in a special panel session taking place Wednesday August 15 at SPIE's Optics + Photonics exhibition in San Diego.