Disk lasers diversify and power up

LASYS 2012, IFSW Stuttgart and Trumpf suggest that disk lasers are holding their own in laser manufacturing applications. 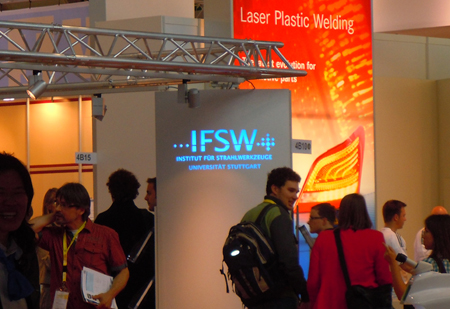 LASYS 2012 focused on the application of lasers and beam sources to manufacturing.

Following June's LASYS 2012 exhibition and associated conferences held in Stuttgart about the application of lasers and beam sources to materials processing, optics.org has taken a closer look at some of the key conference themes that were discussed. The city is home to Trumpf, the world’s largest laser company, the Institut für Strahlwerkzeuge (IFSW) at Stuttgart University and was also the birthplace of the disk laser in the early 1990s.

”Basically, at IFSW we are following three main R&D trends with respect to disk lasers: the further improvement of beam quality of CW multi-kW thin-disk lasers; the development of ultrashort-pulse thin-disk lasers with kW average power; and improving beam shaping (polarization and wavelength-selection) of thin-disk lasers.”

Disk lasers are diode-pumped, solid-state lasers, which were first demonstrated in the early 1990s by Adolf Giesen at the University of Stuttgart. The gain medium is a crystal, which is typically Yb:YAG, in a thin disk. Other materials including Nd:YAG and ytterbium-doped gain media are used for broad wavelength tuning.

Graf continued, ”The improvement of beam quality requires the reduction or the compensation for the very small, thermally-induced beam distortions. Compensation for phase distortion can be achieved by using an aspherical mirror in the resonator as we have shown in Optics Letters 36 (6), 799-801 (2011).

”In that case, we have improved the brightness of a 5 kW laser with a single disk by almost one order of magnitude. An alternative, more fundamental approach is to reduce the thermal load. This was done by pumping into the zero-phonon absorption line, which led to a new world record in fundamental-mode power and efficiency. This also allowed us to significantly enhance the efficiency in multimode operation. The published powers were only limited by the available pump powers.” 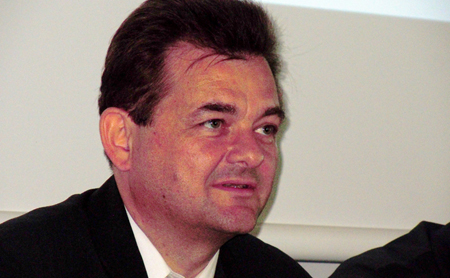 Considering the second focus, Graf, said, “A prerequisite for developing kilowatt mode-locked thin disk lasers is to first ensure CW fundamental-mode operation at kilowatt power levels. Hence the above developments ultimately lead into the development of higher power, ultrafast thin-disk lasers, which is a domain where fiber and diode lasers are less likely to compete with the disk technology.

”At present IFSW is investigating the high-power capability of several crystals that are suitable for mode-locked operation. Recently we demonstrated a new power record (yet multimode) with Yb:LuO, as published in Laser Physics Letters 9 (2), 110-115 (2012).

”We also demonstrated the first ever Yb:SSO thin-disk laser in Optics Letters 37 (1), 37-39 (2012). Recently this laser was mode-locked and attained 3.3 W with 527 fs pulses. The further optimization of the crystals growth will allow for significant further progress. In cooperation with a French institute we also demonstrated the first ever Yb:CALGO thin-disk laser; see Optics Letters 36 (21), 4134-4136 (2011).

So what is Graf’s view of the longstanding debate about whether the fiber laser could displace the disk laser in industrial applications? “I have been answering such questions for at least 10 years and I will say it again: there is a huge market for disk lasers, which do not need the characteristics of fundamental mode lasers, such as fiber lasers. In fact, many materials processing applications do not work so well if the beam quality is too high. So although fiber lasers often have better beam quality, the disk laser is still doing very well, thank you.”

”It is not simply the case that the arrival of the high power fiber laser is going to displace the disk laser; they have different areas of application. In the market, there is room for more than one technology: Just because there is a new Mercedes it does not mean that the Audi is going to stop production. In the future we will also see the kilowatt and multikilowatt diode lasers.

”Despite what some people in the materials processing sector believe, there are many more manufacturers of disk lasers besides Trumpf. According to our statistics at the IFSW, [we have] more than 20 licences active worldwide – including Jenoptik. Many of these are for small frequency doubled disk lasers, of just a few tens or hundreds of watts.

”In research, various groups including IFSW are looking at different types of crystal to achieve higher powers and picosecond or femtosecond versions of disk lasers. Talking about new wavelengths, we should also be looking at green CW disk lasers for the welding of copper, for instance. To make better CW lasers we need polarized light sources – which is what thin disk lasers can deliver.” 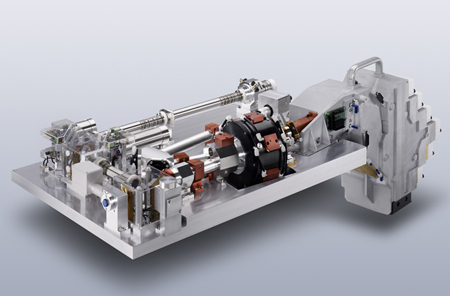 At Lasys 2012, Trumpf was showing its new TruDisk disk laser’s range of applications as an industrial tool for materials processing and production. Engineers demonstrated the new solid-state laser’s operational flexibility and power economy, and “intelligent” energy management. The company stated, “The TruDisk disk laser is a champion in reducing both energy consumption and operating costs.”

Dr Gerd Schoellhammer, Trumpf’s VP Marketing, told optics.org, “It all starts with the pump source. Rather than the flashtubes of rod lasers in widespread use, disk lasers use efficient diodes to pump the laser light. Together with an optimized resonator design, resulting in optical-optical efficiencies of up to 70 per cent, the system is capable of achieving overall beam source efficiencies of well over 30 per cent. Compared to flashtube-pumped lasers, this can reduce electricity consumption by up to 90 per cent.”

In the Trudisk integrated disk laser tool, the beam makes its way from the resonator, through the laser tool to the workpiece via components such as the fiber-optic cable, control system and focusing optics. Around 10 per cent of the energy applied is lost in these components. Calculations that only consider beam-source power consumption will often not factor in these losses.

Trumpf says that to produce realistic power consumption figures, it is always necessary to consider the laser power arriving at the workpiece. Laser system cooling is also a major factor that can compromise efficiency. The company says that in this respect, the TruDisk laser makes energy savings with its efficient heat exchanger and integrated water management.

Schoellhammer added, “Anyone looking to judge their energy consumption realistically should include the infrastructure and take actual power usage at full laser power at the workpiece as their basis for calculation. Doing this shows clearly that disk lasers are an extremely energy-efficient laser concept. Another design benefit is that the TruDisk’s integrated energy management system senses when the laser has stood idle for a while and will put it into standby mode.