Part two of optics.org's series of articles on the SEPNET conference on fiber lasers.

In the second part of optics.org’s report on the recent SEPNET conference on fiber lasers at the ORC in Southampton, UK, we review some of the technical and R&D presentations. According to conference chairman and SEPNET director, John Lincoln, extending the capability of fiber lasers will be key to maintaining their phenomenal growth rate, enabling many new applications, as well as displacement of “traditional” gas and solid semiconductor laser sources. 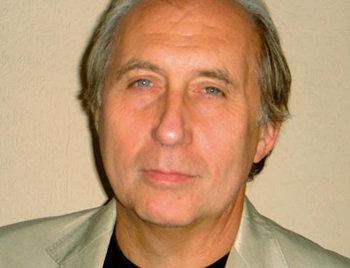 ’UV super-continuum' fiber lasers
Considering his specialist area of ultrafast fiber lasers, Anatoly Grudinin, director of Southampton-based Fianium told the gathering, “Looking at fiber lasers today, we have good understanding of the key underlying physical processes. Our arrival at what can described as a mature technology lays a good foundation for the development of higher performance and lower cost fiber lasers.

“The future for materials processing for many consumer electronics developments lies in the integration of ultrafast fiber lasers, featuring: shorter pulse-widths, with less generated heat, and overall of higher quality. That means higher repetition rates and throughputs but with lower costs as well as flexibility in pulse-width- and wavelengths without compromising on system performance and cost.”

“Ultrafast fiber lasers in general and super-continuum sources in particular have good prospects to become a key technology in biomedical applications. The speed of market penetration of ultrafast lasers into industry depends on how quickly the cost of picoseconds lasers will become comparable with that of their nanosecond counterparts.”

Looking into his crystal ball, Grudinin anticipated what he called “UV super-continuum” fiber lasers– with high power versions transmitting at below 390nm and lower power models below 350nm. “We have launched a 10W super-continuum model in 2012,” Grudinin said, adding “and we have demonstrated a 20W model in the lab.”

Even lower repetition rates are possible and there is a project at Fianium to develop a single shot to 80MHz source. The so-called “Femtosecond Supercontinuum” source will be achieved by pumping PCF with a femtosecond 1064nm source.

Earlier in 2012, Fianium launched its WhiteLase Micro Supercontinuum Source. This is a quasi-continuous wave, 20MHz repetition rate system which offers a generous wavelength range of 450nm extending to greater than 2000nm, giving a total output power of more than 200mW. The laser-like beam allows for easy collimation, beam steering and focusing to a diffraction-limited spot for use in a variety of applications. The unit is operated by the flick of a switch and can be either mounted to optical bench or incorporated into optical tool.

Extended power limit
Steve Norman from another local company, Trumpf-owned SPI Lasers, decribed his company’s work on extending the power limit of fibre lasers, focusing first on innovations in side pumping that have proved advantageous over traditional end face pumping techniques that are often used in traditional lasers. 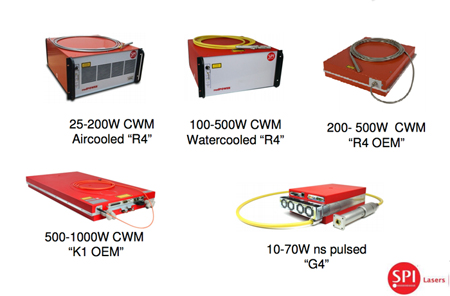 Norman commented, “Side pumping is good because it avoids localized pump injection. This is reliable, power scalable and allows for multi-port pumping. Furthermore side pumping is essential if we are to achieve ever higher powers from fiber.” He went on to describe SPI Lasers GT Wave design of fiber laser in which the pump fiber is integrated with the lasing fiber in a structure known as the All-Fiber Integrated Laser Architecture.

SPI has identified five “design criticalities” in its quest for the optimal design of a high power fiber laser, which Norman listed thus:

(1) optical subsystem packaging – thermal and modal management, including management of input pump and output signal and control of “stray” power; (2) keeping a firm control of the specifications of the pumping laser including its cost; (3) attention to the type of fiber used in the laser, particularly to ensure that photo-darkening is avoided; (4) similarly careful selection of other laser components including FBGs, cladding, sensoric elements and optics; and (5) dynamic control of the power and modulation.

After acknowledging the variety of competing fiber lasers coming onto the market from big-name manufacturers who are seeking to challenge market-leading IPG Photonics, Norman presented a showcase of SPI Lasers’ latest models including the 500W, 750W and 1kW “K1 OEM / Red Power” range, which are based on a pumped laser cavity with single mode/ multimode delivery fiber. 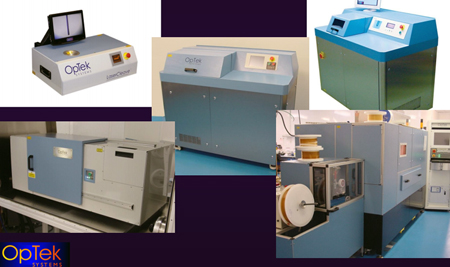 Mike Osborne of Optek Systems gave a presentation entitled “Manipulating high power fiber to create the next generation of sources & components”, which covered: Getting photons into a fiber; removing unwanted photons; combining multiple fibres and diodes; controlling and combining photons emerging from fiber lasers; and stopping unwanted photons getting back in.

Optek Systems supplies laser processing tools and sub-contract laser machining services. With an installed base covering Europe, USA, and Asia the company has installed precision machining equipment – including for fiber manipulation and manufacture in most manufacturing environments from clean-rooms to construction sites.

Duncan Hand, from the Institute of Photonics and Quantum Sciences at Heriot-Watt University’s School of Engineering and Physical Sciences gave a presentation entitled High precision processing - short or ultrashort pulses?.