Coupled laser pairs ‘switch each other off’ 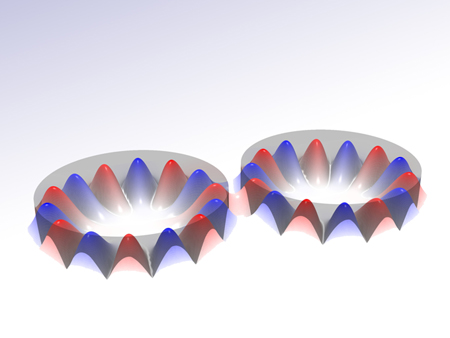 One might believe that that two lamps would be brighter than one but this apparently simple additive principle does not necessarily apply to lasers, as a team of scientists, led by the Vienna University of Technology have discovered.

When one laser is shining and another laser beside it is gradually turned up, complex interactions between them can lead to a total shutdown with no light emitted at all.

For technologies bridging the fields of electronics and photonics, this result may be significant. The findings by the team from Vienna University of Technology, Princeton, Yale and ETH Zurich have been published in an article entitled Pump-Induced Exceptional Points in Lasers in the journal Physical Review Letters.

When switch on means switch off

“Imagine two light bulbs right next to each other, one of which is switched on. As you gradually turn on the second bulb by adjusting a dimmer switch, you expect the room to get brighter”, says researcher Matthias Liertzer, who studied the behavior of coupled micro-lasers using computer simulations, together with Professor Stefan Rotter at Vienna’s Institute for Theoretical Physics (“TUV”). They were supported by scientists from Princeton University, Yale University and the ETH Zurich.

Liertzer told optics.org, “Our theoretical work was motivated by experiments on coupled lasers that were carried out here at TUV. In our simulations we saw a very counter-intuitive lasing behavior which we first couldn't connect to any of the known effects in laser theory.

“After some more theoretical work we discovered that the solutions to our lasing equations can give rise to a phenomenon which mathematicians call an ‘exceptional point’. This connection eventually provided us with the desired explanation for the effect that we saw in our simulations.”

To make a laser shine, it has to be pumped – it has to be supplied with energy, using other light or an electric current. If only one of two micro-lasers is pumped, just the pumped laser will emit light. Liertzer adds, “Surprisingly, pumping the second laser as well does not necessarily increase the brightness of the coupled system. Supplying more energy can even reduce the overall brightness, until both lasers become dark.” 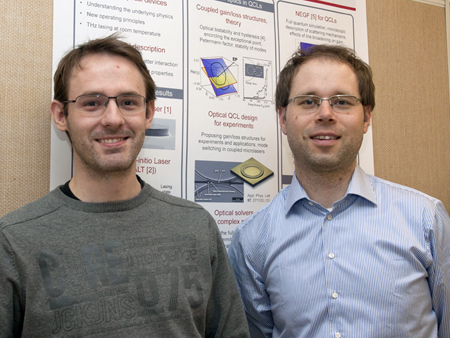 Looking on the dark side: Liertzer and Rotter

Stefan Rotter comments, “When we saw that the two lasers can switch each other off completely, due to the coupling between them, we knew that either we had made a mistake or this is a spectacular result.”

“We say that the effect is spectacular because it is so counter-intuitive. Conventionally, one would not expect that a laser would turn off when the applied pump power is actually increased.” In the meantime, the effect was confirmed in independent calculations by the co-authors from Yale.

TUV’s laser simulations are directed towards quantum cascade lasers – electrically pumped lasers that emit light in the terahertz/mid-infrared part of the spectrum. Their active medium is based on suitably designed quantum-well hetero-structures. Such lasers are grown with molecular beam epitaxy by other TUV colleagues, who are currently working to reproduce Liertzer and Rotter’s predictions.

It is well established that lightwaves can interfere with each other and cancel each other out. The interplay between the two lasers in this experimental work at Vienna, however, is said to be more complicated than that: “This effect is not just about wave interference. It is a combination of interference and light amplification, which can lead to seemingly paradoxical effects”, says Liertzer. New methods, some of which were developed by mathematicians at TUV, were necessary to solve the complicated equations which describe this problem.

Rotter explains: “The phenomenon is based on what mathematicians call exceptional points, which are special intersections of surfaces in complex spaces. The appearance of such exceptional points in our laser equations can lead to a laser blackout. In this way we could connect a rather abstract mathematical structure to a measurable phenomenon.”

Electrical engineers at TUV are also working on experiments with micro lasers, in which Liertzer and Rotter’s theoretical predictions should be verified. Laser effects like this one are especially interesting, as they show new ways to connect microelectronics and laser technology. In today’s computers, information is transmitted by electric signals. Adding laser light could open up exciting new possibilities.

Liertzer described some potential applications of the newly-observed effect: “In the short term, the effect is of importance in measuring the gain characteristics of quantum cascade lasers, which is often performed using coupled lasers similar to ours.

“In the long run, we believe that the effect may be relevant for optical communication as we demonstrate how one laser can switch off another. This may be interesting for optical switches and logic operations based on coupled microlasers.

“When using quantum cascade lasers such a switching behavior could even be induced electrically. The integration of such an optical switch into small electric circuits may open up exciting possibilities.”