SEPNET meeting at Southampton’s ORC reviews the growing importance of the next generation of fiber sources and components. 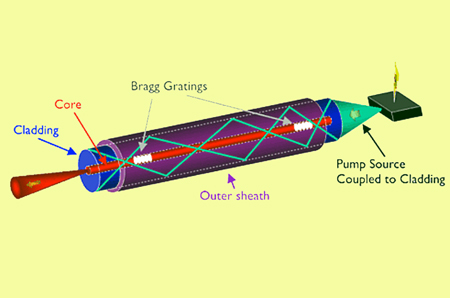 Fiber lasers have had huge impact in the market place in recent years, rapidly penetrating many areas of precision materials processing in modern manufacturing.

The powers available from fiber sources continue to increase, with kilowatt class lasers now common. At the same time, the benefits of processing materials with high peak-power, short pulses are becoming increasingly evident.

Recognizing this emergence of the fiber laser and the growing tendency of this type of source to displace long-serving technologies such as the CO2 laser, the diode laser and other types of semiconductor laser, SEPNET, the South of England Photonics Network, organized a conference on 29 May 2012 at the world-famous Optoelectronics Research Centre’s new Mountbatten Building at the University of Southampton.

"Extending the capability of fiber lasers is key to maintaining their phenomenal growth rate, enabling many new applications, as well as displacement of traditional laser sources. This event is for business leaders, engineers and applications professionals looking to understand how far and how fast fiber lasers will develop."

The seminar reviewed the latest UK developments in fiber laser sources and their components and progress toward higher powers, and shorter, higher energy, pulses. This will include near-term developments and a glimpse into future prospects for Joule-level fiber lasers.

This was combined with discussion of application drives in precision processing and the current and future strategy for developing laser processing in the UK that will leverage the latest fiber sources. 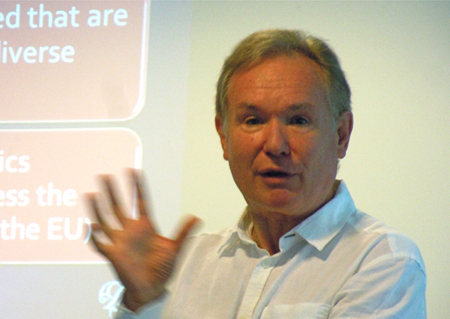 The day’s presentations featured a mix of technical and business-focused talks recognizing that fiber lasers, while still undergoing substantial research and development programs across UK academia and industry, also constitute an increasing share of the marketplace activity.

The conference - and the recently rebuilt ORC venue - was introduced by Professor David Payne, a leading Professor at the University of Southampton and Director of the Optoelectronics Research Centre. Payne’s pioneering work in fiber (and fiber laser) development since the 1970s has resulted in almost all of the specialty fibers in use today including the fiber lasers currently undergoing rapid growth for applications in manufacturing and defense.

"The new Mountbatten Institute comprises 80 core research staff, 30 dedicated academics, 40 experimental offers, process engineers and technicians as well as 150 PhD students. As well as a 1500 square-meter clean room facility, we have a fabrication suite for fiber lasers and optical waveguides including four fiber draw towers and many other specialist manufacturing tools."

Payne described the benefits of the ORC facilities and the opportunities it is facing, as dedicated photonics R&D centre. "We have vertical integration between electrons and enterprise, there are low barriers to collaboration and we have a coherent management structure that is focused on research," he said.

"We have many strategic research themes that are aligned to major funding opportunities. Furthermore, with our new facilities, which opened in January 2011, the ORC is ideally placed to address the future challenges of a global market, estimated to be worth £300 billion in the EU alone.” 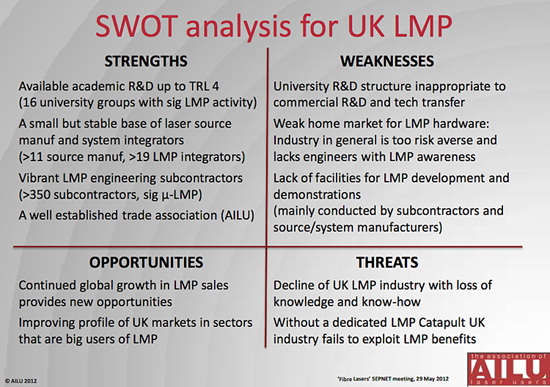 Mike Green, Secretary of the UK’s Association of Industrial Laser Users (AILU) had some interesting observations about the UK’s apparent love-hate relationship with lasers - whether fiber or otherwise - in his presentation, entitled UK strategy for laser materials processing.

He cited figures from the Laser Marketplace analysis by Laser Focus World at Photonics West in January 2012, which ranked the global lasers for manufacturing market at 26% of total laser sales - second only to their sales into communications (31%). Green also noted that relative to sales of traditional machine tools, global sales of laser materials processing systems had grown tenfold since 1986 (based on data from Optech Consulting).

So far so good. But when it came to comparisons of enthusiasm for laser-based manufacturing systems between the UK and Germany, Europe’s leading manufacturing nation, there was a significant gulf between UK industry’s seeming reluctance to buy into the 50-year-old technology against Germany’s enthusiasm for the creative power of the photon.

"According to AILU’s figures, German manufacturers buy almost 10 times as many industrial laser systems proportionately than their British counterparts," Green told the conference. The splits between the two countries by specific laser type told the same story. Considering high-value CO2 lasers, the UK buys 8.5% the value of German investment, while for high-value fiber laser-based and Nd:YAG-based manufacturing systems the ratio is just 5%.”

AILU has devised a “SWOT” analysis based on its observation of the UK’s adoption of and attitude to laser materials processing (LMP). Identified weakness included: “University R&D structure inappropriate to commercial R&D and technology transfer” and a “weak home market for LMP hardware” while threats to LMP in the UK include the “decline of UK LMP industry with loss of knowledge and know-how.”

Green concluded: "AILU should take ownership of producing a UK LMP roadmap. In parallel with this, options will be investigated regarding: the provision of one or more LMP dedicated R&D centers; outreach to potential industrial users; extending coverage of LMP in university engineering courses; and easing the purchase of LMP technology by SMEs in manufacturing."

optics.org will be shortly publishing a second part to our review of SEPNET’s fiber lasers: The next generation of sources & components conference, detailing some of the technical R&D projects taking place around the UK.