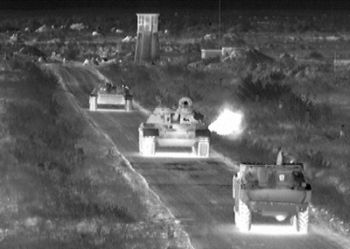 Out in the open

"Modern asymmetric warfare imposes new and stringent requirements on the sensor technologies and image resolution needed by the war-fighter - which is good for business."

Addressing a symposium on government funding at SPIE DSS 2012 in Baltimore, Fenner Milton of the US Army Research, Development and Engineering Command made a point that was reiterated throughout the conference: that new IR technologies suited to the military's changing needs were required, and that the companies developing them could find a welcome audience among those with funds for military research and development.

Others on the panel agreed. "Our mission is changing, while at present our sensors are not," confirmed Brent Appleby of DARPA. "The nature of intelligence and surveillance, our 'mission pull', now involves looking for people rather than objects, and for things that are well hidden. But at present our sensor technology tends to be better at seeing objects than people, can have limited effectiveness in tough environments, and is often too expensive or inefficient."

Addressing these deficiencies will require new approaches to the problem from photonics developers. The trend will be away from small aperture/high power optical systems, and towards large aperture/low power devices, as well as an increasing use for 3D visualization and images generated by computers from the raw data. Rather than being simply built to a broad specification, sensor systems will need to be designed for regular refreshment.

"The new paradigm will include adapting commercial hardware and software development processes, and we actively seek engagement with people in industry who have good ideas," said Appleby. 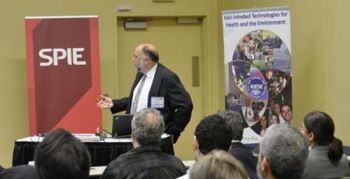 Commercial realities
Arranging a happy marriage between commercial developers and military partners will involve overcoming the different expectations of both sides, as the symposium confirmed. Developers must appreciate that the military wants quick transitions, rather than extended research programs, and typically expects to see results in 12 to 24 months.

"It is also true that, in essence, we would prefer not to commercialize or share the technology, but rather keep it on our side," said Jerry Meyer of the Naval Research Laboratory. "But of course we are very interested in cost reduction, and that typically comes from having a commercial base. So in practice, commercialization can take place; usually either from older, less cutting-edge versions of the technology, or spin-offs at a lower performance level than that being developed and deployed by the military."

Ralph Taylor-Smith of Battelle Ventures presented the venture capitalist's viewpoint. He stressed the need for small companies and spin-outs to prepare the strongest possible business plan for their approach to VCs, rather than concentrate solely on a technology road map.

He also urged developers to consider whether they really wanted VC investment in the first place. "VC money may not be appropriate," he said. "It brings with it not just new levels of complexity, but also a need for total accountability. Consider whether banks, credit agencies or willing friends might serve your cash needs better."

Contact with VCs can be a dose of reality for some small companies, since investors are narrowly focused on a set of key parameters and are ultimately interested in financial return.

"The first key factor is the technology itself and whether it is works outside the lab - something the military will take very seriously," said Taylor-Smith. "Other issues include the enthusiasm of the management; the deal structure; and critically the exit strategy that will allow the investors to realize their profits. And of course the X factor: will this technology be huge?"

Sofradir, the Paris-based manufacturer of infrared sensors for military and aerospace applications, has developed what it says is the first 10 micron pixel pitch infrared detector for tactical applications.

The small pixel pitch leads directly to an increase in the number of pixels on a standard size chip, and so to improved image resolution. Sofradir expects the sensor to see use in long-range surveillance, armored vehicles, and infrared tracking systems.

The cooled prototype sensor on show at DSS could lead to military imaging systems that are more effective in distinguishing between small objects at distances up to 10 km, according to the company, and able to penetrate through fog and smoke.

Speaking to optics.org on the show floor, Marc Larive of Sofradir said that the key breakthroughs allowing the 10 micron pixel pitch were the company's mercury cadmium telluride photodiode implantation process, and the careful positioning of the indium bumps connecting the detector circuit and its associated integrated circuit. This could lead to fitting more pixels on a given infrared chip, or to the development of smaller chips for coverall cost savings - a good match with the changing paradigms outlined in the conference symposiums.

Tim Hayes is a Contributing Editor to optics.org