BIPV: a window of opportunity for advanced optics?

Amid the volatility of the PV sector, optics look poised to play a role in future solar windows – and not just in buildings.

by Andrew Williams
Against a background of increasingly stringent energy efficiency requirements, the market for building-integrated photovoltaic (BIPV) glass is projected to rise sharply over the next few years - with advanced optics identified as a key component technology. So, what are the prospects for the optics sector in this burgeoning industry? And what types of optical technologies are being developed to drive BIPV innovation forward?

Though yet to take off in a big way, BIPV, where 'conventional' building materials such as windows, roofs or skylights are replaced with PV materials, is projected to become an increasingly viable source of electrical power. Earlier this year, a report by market analysis firm BCC Research estimated that the global BIPV market stood at 1.2 GW in 2010 and would more than double in size for several years to reach more than 11 GW in 2015.

Meanwhile, NanoMarkets estimates that over the next four years the BIPV glass market could reach more than $6 billion - and identifies a clear role for advanced optics in the development of cutting-edge BIPV technology.

On a more cautionary note, Lawrence Gasman, principal analyst at NanoMarkets, indicates that by far the largest slice of this market will come from so-called 'prestige' buildings, with the large apparent value of the market actually somewhat distorted by the fact that the glass used is very expensive.

"Our forecast shouldn't be interpreted as meaning that there [is] going to be a very high penetration of BIPV glass in commercial buildings," he explains.

BIPV costs
BIPV glass is certainly not cheap. One estimate, from a European Photovoltaic Industry Association (EPIA) report on the topic, highlights the significant premiums involved: it suggests a price range of €400-800 per m2 for a semi-transparent PV module, with some very special products costing more than €1000 per m2.

"While glazed BIPV can hardly compete with low-cost laminated glass, it becomes a competitive option if compared to more sophisticated architectural glass (without taking into account the electricity generated),” the report states.

The cost of architectural glass varies widely, ranging from less than €100 per square meter for basic glass to several times that figure for high-end, multi-pane glass with advanced features such as infrared reflection.

“Since architectural glass can be such a high-value material, the cost of incorporating PV cells into it can be a relatively small portion of the total project cost,” suggests the EPIA report. “And that is before considering the value of the PV electricity produced. The opportunity here is to sell BIPV glass as purely an architectural cost, and to treat the electricity generated as a ‘free’ bonus of selecting BIPV architecture." 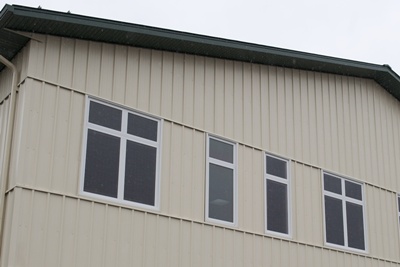 Pythagoras Solar
In a sense, says Gasman, the 'absorption' function of PV and the conventional 'transmission' function of glass are inherently at loggerheads with each other - particularly in terms of the cost implications. But one such approach is being promoted by the US-based BIPV glass pioneer Pythagoras Solar, where optics are used to position the PV cells in such a way that they minimize light attenuation.

"Using this technology, transparency is increased, but obviously somewhere along the supply chain, someone has to pay for the optics," says Gasman. "Pythagoras is currently the most important example of [a company] using optics in this way, but other firms appear to be thinking along the same lines.”

According to Udi Paret, vice president of business development and marketing at the Californian company, the PVGU combines modularity with ease of installation, and is designed to meet advanced building codes and standards. It can also be optimized for a variety of uses, and is eligible for government incentives.

"The first products are designed for curtain wall and skylight applications and can be optimized for elevation, location, and climate zone," says Paret. "The combination of energy savings and energy generation provided by the PVGU allows the product to pay for itself in less than five years. Future products such as colored roof tiles and spandrels [used to cover parts of the construction from the exterior] will provide a complete facade solution."

Diffuse light
The PVGU is designed around the standard approach for an insulating glass unit (IGU), with two panes of glass separated by an air cavity. Within the cavity sits a system of optics and PV cells. The optics direct sunlight from all angles, concentrating it onto PV cells that sit perpendicular to the glass.

For most south-facing installations [in the northern hemisphere], the sun’s lowest position in the sky is around 25 degrees above normal to the window. All light from above this angle is directed towards the solar cells, while the light from below 25 degrees (diffuse light) enters the building.

"By redirecting light onto solar cells that convert the light into electricity the PVGU simultaneously provides a very effective shading solution while also generating a high level of electricity," says Paret.

Earlier this year, Pythagoras installed 20 such units at the Organic Valley farming co-operative’s headquarters in La Farge, Wisconsin, transforming its window facades into 'renewable energy generating assets.' Paret says that the optical solar windows enable staff at the office to turn off artificial lighting and work with more natural, diffused, light - rather than glare. The solar windows have also reduced cooling requirements, thanks to lower heat penetration.

More recently, and in response to the growing demand for energy-efficient buildings and BIPV glass technology, Pythagoras announced a partnership with the materials and construction company Guardian Glass to produce and market a 'SunGuard' PVGU for commercial buildings.

"Now, architects and developers can deploy BIPV with more confidence than ever before,” says Paret. “Guardian and Pythagoras Solar are working together with Guardian’s certified glazing partners and the architect and engineering community to ensure the seamless integration and economic viability of this product within existing building design and construction practices." 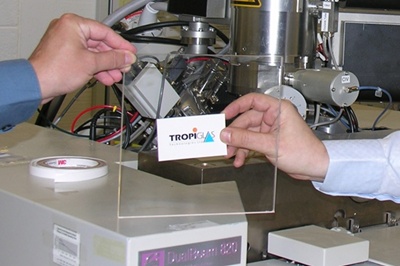 Tropiglas Technologies
The Australian start-up Tropiglas Technologies is working with Edith Cowan University in Western Australia on a similar development - energy-generating clear glass panels, targeted not just at the construction sector, but also the automotive, horticulture and 'specialty' markets.

"The technology is based on the integration of micro- and nano- engineered optical structures and materials to realize shatterproof, extremely stable clear glass panels that not only block the UV and IR radiations, but also harvest them and convert them to electricity via PV cells placed within the window frames," explains Kamal Alameh, director of the Electron Science Research Institute and the Centre of Excellence for MicroPhotonic Systems at Edith Cowan University.

Alameh, who is also part of the Tropiglas development team, says that the ‘smart window’ technology uses a combination of spectrally-selective optical structures and “nano-particle assisted” waveguides. Those structures include micro-engineered phase elements and layers of nanoparticles deposited between the panes, both designed to deflect infrared light to the window edges, for subsequent conversion to electricity by PV cells.

But Rosenberg is particularly optimistic about the potential application of the technology in the automotive industry, highlighting that air-conditioning systems can increase the fuel consumption of a vehicle by up to 28% - and up to 100% for a hybrid electric vehicle.

"By using Tropiglas technology, we can reduce this amount significantly, as well as creating additional power for all types of cars," he claims.

Tropiglas is working with university researchers in Australia, Korea and Russia to optimize the technology and – crucially - to develop a large-scale (exceeding 1m x 1m) manufacturing process to make uniform, cost-effective wondows containing spectrally-selective optical structures at a high yield. Another research theme is to refine the waveguide design to minimize visible radiation losses and maximize energy generation beyond 50 W/m2.

"In addition [we are] planning a pilot plant installation of glass in a new building in Perth, Australia, and working towards securing licensing partners to take the products to the global market," says Alameh.

With a number of other firms, including Dyesol and Mage Sunovation, as well as household names Pilkington, Schott and Sharp, also starting to develop BIPV glass, the emerging sector looks set to enjoy an exciting period of growth – a period that could also drive innovation in optical technology.

Andrew Williams is a freelance journalist specializing in business, energy and technology.