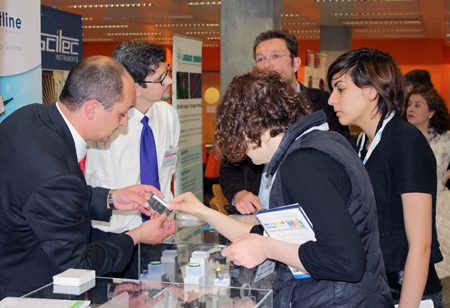 Xmark Media, the company behind The UK’s annual Photonex conference and exhibition has extended the event’s brand to a “roadshow” with a one-day conference and mini-exhibition taking place at the end of April at Imperial College, London.

Two parallel conferences addressed respectively Advances in photonic tools and techniques for the life sciences and tutorials on photonics techniques and instrumentation. The former were generally highly academic presentations while the latter were extended product and application descriptions by some of the roadshow’s main exhibitors.

Xmark Media and Photonex event director Laurence Devereux told optics.org, “Significant advances in the development of optical techniques are leading to an increasing role of photonics in the study of various problems in the life sciences, in medicine, clinical sciences, and neurophysiology.

"Researchers are looking for better ways to analyse complex processes and photonics underpins many of the most promising approaches for medical diagnosis, drug development and other clinical applications.”

Intra-vital Imaging of SRC Response to Dasatinib Treatment using FLIM-FRET. Prof. Kurt Anderson (Beatson Institute for Cancer Research, Glasgow) explained how intra-vital Fluorescence Lifetime IMaging - Fluorescence Resonance Energy Transfer is used to study the effects of microenvironment on cell migration, and monitor drug response both at the sub-cellular level and with respect to features of the tissue and a tumor. 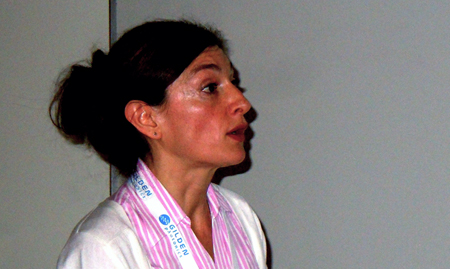 Shedding new light on cells with coherent multiphoton microscopy. Prof Paola Borri, (Biophotonics, Cardiff University, pictured left) spoke about how optical microscopy is an indispensable tool that is driving progress in cell biology, “and is still the only practical means of obtaining spatial and temporal resolution within living cells and tissues.”

She told the conference, “One of the most utilised multiphoton [nonlinear] microscopy techniques is two-photon fluorescence, in which the biomolecules of interest are labelled with fluorophores, which are optically excited via simultaneous absorption of two photons.”

Matcher concluded, “PS-OCT shows potential as a tool to rapidly and quantitatively map the 3-D spatial orientation of collagen fibers in native and diseased cartilage. Structural OCT is able to track the formation of neoepidermis on DED scaffolds by a fibroblast/keratinocyte co-culture.” 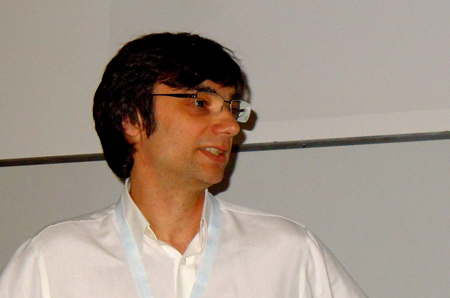 ”Layers of hyper-profilterating cells have a similar hypo-echogeneic appearance to the stratum basale in healthy skin. Wound healing can be quantified longitudinally and non-invasively in tissue engineered constructs, enhancing the potential of such constructs to become established platforms for drug testing.”

Towards developing a terahertz metrology in applying time-domain spectrometry serving the Life-Sciences’ Grand Challenges. Dr Robert Donnan (Electronic Engineering, Queen Mary, University of London) presented a review of current “grand challenges” in biological and chemical sciences and of the relation of terahertz Time Domain Spectrometry to them.

He commented,“Present designs are limited in their temporal resolution and because microscopes are typically designed to image in a single plane. This is problematic for studying neural signaling which occurs on the 1-100ms timescale and is distributed in 3D space.”

Silver described a 3D 2-photon microscope based on a novel acousto-optic lens design that overcomes these limitations, including the design details of the AOL microscope and demonstration of its utility by measuring fast neuronal signaling in 3D, both in vitro and in vivo. “We use fluorescent neuronal tracers and calcium indicators to measure AP-evoked [Ca2+] transients in spines, dendritic shafts and somata of neurons from mouse sensory cortex,” he said. 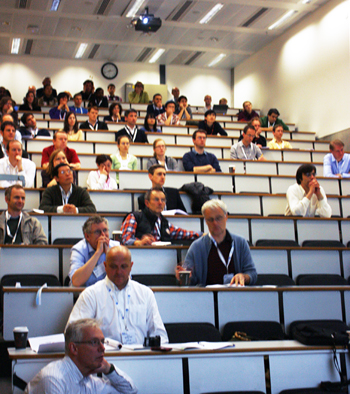 Elson described recent developments and concluded, “This technology has been assessed in vitro and results suggest that it could be used to align and register pre-operative medical images onto the live endoscopic view for surgical guidance.

Some key exhibitors’ new products were demonstrated at Photonex London, including:

Andor’s ultra-sensitive iXon EMCCD camera is designed for hyperspectral imaging and “may lead to new generation of rapid, automated cancer screening systems,” claims the company. Applications could be in the detection of malignant melanomas, the most dangerous type of skin cancer, which is caused mainly by intense episodes of UV exposure.

Toptica Photonics’ FemtoFiber smart family of ultrafast fiber lasers offer dedicated solutions for different applications. For example, the FemtoFErb 1560 is suitable for terahertz generation with InGaAs antennae; while the FemtoFErb 780 is suited for non-linear microscopy or microlithography.