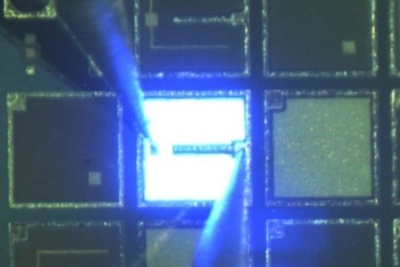 Plessey, one of the few remaining semiconductor manufacturers in the UK, is set to move into production of high-brightness LEDs based on some highly regarded technology developed at the University of Cambridge.

The company, which has a 6-inch wafer facility in Plymouth, has just acquired the Cambridge start-up CamGaN. The deal sees Plessey gain CamGaN’s intellectual property relating to GaN-on-silicon LED epiwafer fabrication, while three employees from the start-up will now work for Plessey.

Derek Rye, Plessey’s marketing manager, told optics.org that it had been working with the Cambridge team for the past 18 months, and that Sir Colin Humphreys - the Cambridge professor upon whose research the GaN-on-silicon technology is based – will continue to work as a consultant, alongside previous CEO Andrew Lynn.

At this stage, it is not clear exactly what Plessey will sell into the highly competitive HB-LED market – with Rye saying that processed wafers, bare die and LED components are all possibilities. What is clear is that Plessey is intending to purchase a number of metal-organic chemical vapor deposition (MOCVD) reactors to manufacture the epiwafers in significant volumes at its own fab – rather than outsourcing this part of the process to a third-party specialist.

Those purchases are being financed by private equity funding that Plessey has already put in place, while the company will continue to use the MOCVD facilities at Cambridge to further develop the technology in the meantime.

By the end of this year, Plessey is aiming to have produced GaN-on-silicon LEDs with a white-light efficacy of 150 lumens per watt – comparable with state-of-the-art performance with conventional LEDs based on sapphire or silicon carbide substrates. “It’s a challenging goal, but an achievable goal,” Rye said.

Competitive advantage?
Plessey is by no means the first company to pursue GaN-on-silicon LEDs. China's Lattice Power is regarded as the first to have moved into commercial production with a flip-chipped version of the technology, while last month Osram Opto Semiconductors said that it had made some key breakthroughs that would enable it to start selling silicon-based LEDs within two years, following a long-standing development partnership with Azzurro Semiconductors. Osram's white emitters had a quoted efficacy of 127 lm/W and a chip conversion efficiency of nearly 60%.

The competition is likely to get even tougher. At the recent Photonics West conference, Alois Krost from Germany’s University of Magdeburg - and head of the research group that spawned Azzurro – applauded the Osram OS results as “very good”, while adding that industry giants Philips and Samsung were actively pursuing the silicon option through their respective Lumileds and LED subsidiaries.

According to Rye, the key advantage of the approach developed at Cambridge relates to the thickness of the semiconductor layers that are used to overcome the natural lattice mismatch between the silicon substrate and the active gallium nitride layers within the chip structure.

Osram and Azzurro have overcome the mismatch problem through the use of relatively thick buffer material, for example using multiple layers of aluminum nitride. Rye says that the Cambridge team has been able to produce high-quality structures with a much thinner layer structure – meaning that it can be deposited more quickly and at lower overall cost.

John Ellis, Plessey’s chief engineer, said: “To date, the biggest technological challenge preventing the commercialization of high-brightness LEDs grown on large-area silicon substrates has been the large lattice mismatch between GaN and silicon.”

“Plessey’s new GaN-on-silicon process has overcome this challenge and our expertise combined with the intrinsic cost savings of using automated 6-inch processing equipment will position Plessey’s HB-LED lighting products at the forefront of the industry.”

Cost curve
While some in the LED industry regard the switch to silicon substrates as a necessary evolution of the technology in order to enable the kind of low-cost, high-volume manufacturing of high-performance devices needed for general lighting applications, not everybody agrees.

Huge cost reductions have already been achieved through advances in volume manufacturing on sapphire and SiC substrates, and leading LED companies including Samsung, Cree, Osram OS and Philips Lumileds are already in the process of migrating their production to the 6-inch format.

Additionally, the emergence of several well-funded manufacturers in first Korea and then China in recent years – initially to target the market for LED-backlit LCD televisions – has flooded the market with white emitters and pushed down the average selling price of the devices across the board. The past year has been a particularly tough one for western LED makers, who have seen their margins slashed.

Even so, LED-based replacements for conventional bulbs remain an expensive option. Commenting in a University of Cambridge statement on the CamGaN/Plessey deal, Humphreys said: “LED light bulbs currently cost as much as £40, but we expect to be able to reduce that cost by a factor of five by growing on silicon.”

In fact, the cost of LED-based replacement bulbs is also falling fast, meaning that Plessey will be faced with a similarly fast-moving target to beat. Analyst firm IMS Research reported last October that the global average retail price of a 60 W incandescent replacement was $36 – although that figure masked a wide variation in which prices in Germany were upwards of $70 but in Taiwan were less than $20.

And the existing substrate technologies appear to have the headroom for further significant cost reductions. Also speaking at Photonics West, Lumileds’ R&D manager Jyoti Bhardwa told an industry panel session that he expected white-light efficacies to double in the next two years, while a similar level of cost reduction would see LED replacements on sale for just $5.

One company to back up that theory is GT Advanced Technologies, one of the key suppliers of equipment for sapphire boule manufacturing – the raw material from which sapphire substrates are produced – through its Crystal Systems subsidiary.

GT told optics.org that it believed the real battleground between sapphire and silicon substrates for LED production would be fought out when the industry transitions to 8-inch wafer sizes, and that it was making good progress on sapphire at the larger size.

• One of the oldest names in the semiconductor industry, Plessey Semiconductors was founded in 1957 – the same year that it produced one of the earliest integrated circuits. During World War II, its parent company began research at the influential Caswell campus in central England, where Oclaro now manufactures semiconductor lasers for optical telecommunications.

After several subsequent mergers and acquisitions, the Plessey name all but disappeared – before a management buy-out in early 2010 saw it re-emerge under the guise of the privately-owned Plessey Semiconductors Ltd.