10 per cent of the European economy depends on photonics, finds a new report on the leveraging impact of optical technologies. 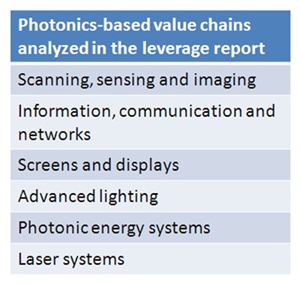 Photonics technologies underpin at least 10% of the European economy, and that reliance will increase as those technologies are further developed in the next decade.

That is just one of the headline conclusions from a new study on the leveraging impact of photonics that has been prepared for the European Commission (EC) by a team working closely with the Photonics21 industry group. Seeking to influence the EC’s approach to supporting technology development under the forthcoming budget and Common Strategic Framework (CSF), the study states that the importance of the technology justifies a separate policy on photonics development specifically.

Written by researchers at TNO, Delft, the consultancy Technologia and the UK’s Electronics, Sensors and Photonics Knowledge Transfer Network (ESPKTN), the report also concludes that, for the most part, photonics remains in the early stages of industrial development, and highlights the threat created by a dependency on rare-earth materials that can only be sourced via China at present.

The findings from The Leverage Effect of Photonics in Europe were presented by John Lincoln from ESPKTN, one of the report’s authors, at the recent LASER World of Photonics event in Munich (see the slide deck here).

The report team analyzed six individual value chains that are crucial to photonics, finding that Europe has some distinct strengths and weaknesses. Among its key strengths are research and development, the value chain relating to laser systems technology, and high-performance products – obvious examples including precision manufacturing equipment such as the lithography systems used in semiconductor manufacturing, and material deposition tools for high-brightness LED production. “Although Europe is considered a world leader in certain fields, it only has a marginal position in others,” summed up the report.

At the same time, volume device manufacturing companies are described by the report as “absent in most value chains”, with the clearest gaps in displays and low-value imaging components. “This results in poor links in some value chains between early-stage development and volume production, making it difficult for Europe to gain the full economic benefit of successful mass market products,” notes the report.

That finding is not new, and has already been characterized as the “valley of death” by the Photonics21 organization. Neelie Kroes, the EC’s vice president for the digital agenda, also highlighted the weakness when receiving a vision paper for the industry from Photonics21 earlier this year, remarking at the time that “it is not enough to do excellent research”. 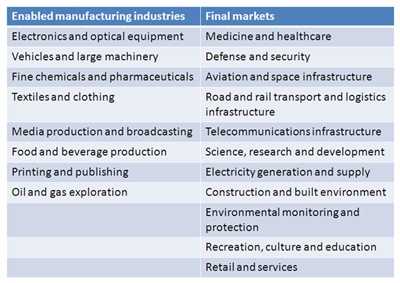 Defining ‘leverage’
The report team defined ‘leverage’ as “the contribution photonics makes to the value of an end product, or service, either by enhancing the productivity of the manufacturing process, or by providing or enhancing the functionality in the end device”. To quantify that contribution, they combined the size of the markets impacted by photonics with an assessment of how critical photonics was in each sector – guided by a survey of experts.

Another key conclusion from the study is that, of the extremely diverse range of applications in which photonics features, some surprising fields offer the biggest opportunities for expansion in the future.

John Lincoln told optics.org that two of those areas are in the built environment and the retail industry. In buildings, this is largely because of the likely future impact of solid-state lighting and photovoltaics, while in retail there is an expectation of added value through increased use of displays and lighting. “The influence of photonics in buildings is set to change out of all recognition,” Lincoln said. Other application areas where photonics is expected to grow strongest include transport, in the form of scanning, imaging and lighting systems, and healthcare, where all types of technologies from laser systems to imaging and displays will find increasing deployment.

One of the recommendations in the report calls for attention to be drawn to these application areas, where the leveraging impact is particularly high, but where current penetration is relatively low. “Policy development needs to take into account that less obvious application areas can also be of importance for photonics,” it stresses. 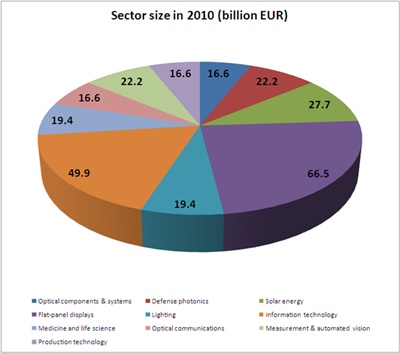 Importance of SMEs
Although it is estimated to account for more than 20% of the global market, Europe’s commercial photonics infrastructure is distributed across a huge number of small and medium-sized enterprises (SMEs). The leverage report estimates that 5000 companies are active in the field, along with well over 1000 research organizations that work on photonics.

Although this points to a vast photonics capability that is perhaps more adaptable than the much larger enterprises that tend to be more prominent in the Asian and North American economies, one message for the EC coming out of the report is that relationships must be established with volume manufacturers outside of the continent for future research developments – particularly if, as expected, the EC decides to direct a greater proportion of funding towards activity with a more direct socio-economic benefit.

Support for SMEs is given particular attention in the leverage report, which calls for a specific policy to support the smaller commercial entities – including for risky start-up initiatives – and to encourage SME spin-offs from research organizations. “This is important because of the research-intensive character of photonics markets,” say the authors, adding that better access to finance for photonics businesses is also needed.

Connecting research and industry
Cutting-edge research is undoubtedly one of the things that Europe does best. Nurturing that strength and a good connection with industry, particularly in areas such as high-value production equipment, must be a priority, the report finds.

To maintain the vertical connection between research and industry, the report also recommends new organizational approaches to share knowledge and research outcomes – although the precise nature of those organizations and their business models will be dependent on the application area and demand further investigation initially.

The report also highlights the inherent risk of a reliance on rare-earth materials that are both scarce by their nature and, in recent years, only available through supply chains originating in China. Rare-earths are crucial in virtually all optical technologies, and research into alternatives as well as trade agreements are needed to mitigate that risk, it says.

Earlier this year, the EC invited responses to its Green Paper on the next strategic framework for research and innovation funding, in which it made clear that there would be a focus on the complete innovation chain in the future, including support for the final stages of technology commercialization. That is intended to help bridge the “valley of death” scenario, in which highly valuable industries such as flat-panel display manufacturing have migrated out of Europe despite the continent being at the heart of early-stage development

The photonics sector member organization SPIE has applauded that aim, as well as the strategic objective of increased spending on research and development activity in general – although it does note concerns about the feasibility of such a laudable aim at a time when many countries in the region are struggling economically.

In its response to the Green Paper, the organization added that fields to be funded within multi-disciplinary projects should be clearly defined and focus on desired outcomes. “The broad nature of innovation as well as political pressure to prioritize environmental themes over technical targets has led to a lack of visibility for enabling technologies like photonics,” wrote SPIE president Katarina Svanberg and chief executive Eugene Arthurs in a joint letter.

They also point out that public-private partnerships tend to work best on a mutual level or in small groups – rather than in huge programs with as many as 30 partners – and back-up the Photonics21 call for more targeted SME support, suggesting programs such as start-up funding, access to marketing and business development consultants, and further financial incentives for R&D investment.

The deadline for responses to the Green Paper expired May 20. Those received will now analysed by the EC as it works on a set of proposals scheduled to be presented before the end of 2011, ahead of a legislative decision by the European Council and Parliament on the Common Strategic Framework.

* The leverage report team used figures calculated by Optech Consulting to estimate the size of the photonics market in Europe. Optech put this at €55 billion in 2008, according to the January 2010 version of Photonics21’s Second Strategic Research Agenda in Photonics.

Mike Hatcher is the Editor in chief of optics.org