The sheer number of photonic component suppliers is duplicating development efforts, and holding back the industry's evolution. 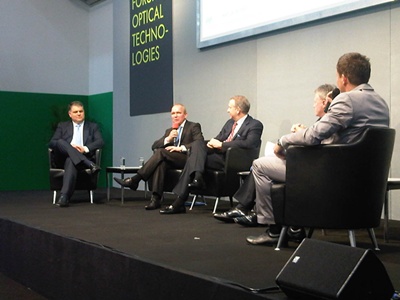 by Mike Hatcher in Munich
Four of the photonics industry’s highest-profile CEOs have called for a rationalization of the supply chain at the component level, saying that its highly fragmented nature is holding back the development of disruptive optical technologies.

The four, representing CVI Melles Griot, Carl Zeiss MicroImaging, Coherent and Qioptiq, were speaking at a CEO round-table event at the LASER World of Photonics event in Munich – itself a testament to the extremely broad supplier base, with over 1000 companies exhibiting at the show.

Crucially, the business leaders want to see a more efficient use of corporate research and development spending. They believe that this could be achieved through a serious bout of consolidation, producing companies of a scale that could deliver revolutionary technologies in the manner of an Apple or an Intel.

Coherent’s CEO John Ambroseo, perhaps in one of the most powerful positions within the industry to prompt that consolidation process, said: “We are too fractured as an industry today.”

Ambroseo argued that there would be major benefits from a more efficient use of development resources, a sentiment backed up by David Marks from Qioptiq, which is already home to a number of consolidated photonics brands under a single umbrella group.

Marks called for “consolidation at the top level”, although both he and Ambroseo acknowledged that the instinctively innovative nature of many small and medium-sized enterprises (SMEs) must remain a key characteristic of the photonics space.

Mega-trends
Much of the round-table discussion in Munich centered on the impact of so-called “mega-trends” in society, and the role that photonics plays in serving those trends. The recent emergence of the mass market for smart phones is one example, with the popularity of iPhones and other brands playing a major part in the rapid recovery of the laser industry throughout 2010.

That smart phone boom has been driven largely by the social media revolution, a phenomenon that was highlighted by Ambroseo as one of three societal trends that will shape the photonics industry over the next couple of years – the others being developments in healthcare and electric vehicles.

Lasers will surely find widespread application in electric vehicle production – with advanced battery technologies a likely target – but it could be healthcare that presents the opportunity for a photonic system to make an impact on a scale approaching that of Apple’s consumer products, suggested Ulrich Simon, the CEO of Carl Zeiss MicroImaging.

Simon sees the need to drive down the costs of healthcare amid an ageing Western population as one of those societal mega-trends, and identified a diagnostic tool capable of early-stage diagnosis of major diseases like cancer and degenerative brain conditions as the type of application that could present a true breakthrough of iPhone proportions.

However, Ambroseo believes that the level of duplication across the industry at the development level makes such a breakthrough less likely. “[At the moment] we can’t do an Apple iPhone for medical applications,” he said.

The fourth member of the panel, the CVI Melles Griot CEO Stuart Schoenmann, is directly involved in a consolidation process right now, with IDEX Corporation set to acquire the laser and component company within weeks. He agrees with the analysis that scale is fundamentally needed to address costs, and this is something that CVI Melles will certainly gain from the IDEX deal.

Schoenmann also stressed the increasing importance of multi-disciplinary technology development, something that has already been recognized across industry and academia. However, he also thinks that politicians generally need to catch up with cutting-edge thinking: “Government policy is typically a decade or two behind the mega-trend,” he quipped.