With business booming, the machine vision market is primed for rapid expansion in Korea and China and adoption of new technologies. 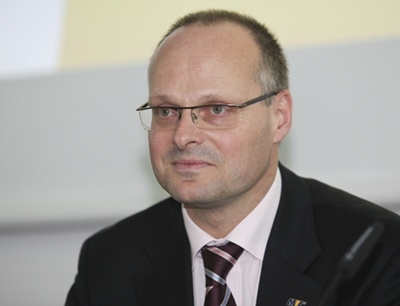 The last two years have been remarkable ones for photonics technologies in most markets, and the story is no different in the machine vision sector. Closely aligned with the fortunes of the high-end automotive and electronics manufacturers located primarily in Germany and the US, this is a market that took a battering in 2009.

But after two successive years of record growth, together with rapid technological progress in areas like 3D and high-speed vision systems, that downturn is fast becoming a distant memory. At the annual VISION trade show held in Stuttgart, Germany, last week (November 8-10) – the key meeting of the year for what remains a largely German-centric industry - the mood was notably upbeat, despite the backdrop of macro-economic fear provided by the latest eurozone debt crisis. Exhibitors at this year's Star Wars-themed show grew to 351 (from 323 last year), with more than 7000 visitors.

Perhaps that mood results from Germany’s own stable economic situation, and its position as the engine room of quality European engineering and manufacturing prowess. But it is apparent that the feel-good factor is being felt on both sides of the Atlantic.

At the event Olaf Munkelt, chairman of the German Engineering Federation (VDMA) machine vision group and also the managing director of MVTec Software, reported that industry sales from Germany alone would top €1.5 billion this year for the first time. “Sales in 2011 will increase by at least 20 per cent,” he said. “There is still a substantial backlog of received orders, and if a large proportion of those can be processed by the end of the year, the 20 per cent mark could be surpassed.”

Market growth will not maintain that kind of pace into 2012, however. In fact, orders have slowed notably since the summer, and the VDMA group now anticipates much more modest growth, of 4-5%, in 2012. “The curve is still upwards, [but] it has flattened out,” Munkelt said, adding that much – inevitably – would depend on the outcome of the various financial and political crises sweeping the continent. 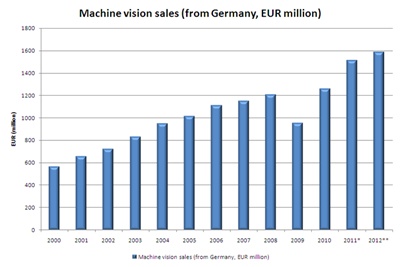 Soft quarters
On the other side of the Atlantic, the Automated Imaging Association (AIA) measured North American market growth at a remarkable 60% in 2010 following the 2009 slump, as the market reached $1.8 billion. Edmund Optics’ Greg Hollows, the incoming AIA chairman, said that growth would be much slower this year, however – partly because the market is more skewed towards the fortunes of the semiconductor sector in North America than it is in Germany.

Hollows is now expecting what he described as “tremendous softness” for the next couple of quarters, and while there are opportunities emerging in areas such as pharmaceutical manufacturing, it appears that the major drive now is towards greater internationalization of machine vision – in particular to the fast-growing economies of Asia.

As if to prove that point, the AIA announced at the VISION event that it had just signed a new memorandum of understanding with its counterpart the Korean Machine Vision Industry Association (KMVIA). Surprisingly, the KMVIA is only a year old – indicating just how new machine vision is to the Korean market. But with the country now such an important center for flat-panel display (FPD) manufacturing in particular, and home to global manufacturing giants like Samsung, LG and Hyundai, it is a market with huge potential.

According to KMVIA’s Sung-ho Huh, the Korean market for machine vision systems will only grow 5% this year. That reflects a slowdown in FPD production as the supply chain was de-stocked, but with next-generation technologies like much larger organic LED displays and touch-screens in the advanced stages of development, major new opportunities for machine vision will doubtless emerge here.

Huh added that the biomedical sector is becoming a promising area for machine vision simply because the likes of Samsung are now increasingly looking to develop health technology applications. And while he said that Korea has not historically focused on quality manufacturing as a priority, especially in “low-tech” industries such as food and agriculture, this could be set to change. Currently the country is home to only a handful of component companies in machine vision, for example the Prism Award finalist Vieworks, but the country’s first machine vision show, scheduled for April 2012 and with around 70 exhibitors said to be lined up already, may begin to change that. 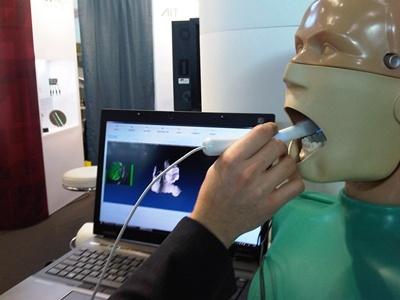 The Apple effect in China
While China has, of course, become the global center for high-volume manufacturing, its own machine vision sector is also underdeveloped – the inevitable result of low-cost manpower in the country and a historical focus on speed rather than quality and efficiency. But with growing economic prosperity, that situation is changing quickly, and the priorities of Chinese manufacturers are likely to change with it.

Isabel Yang from the company LUSTER LightVision, and also the China Machine Vision Union (CMVU), said at the VISION trade show that the production of Apple’s electronic goods in the country is alone responsible for a machine vision market of around $40 million currently - more than a quarter of the entire market in the country.

With China increasingly dominant in the solar manufacturing sector, and also ramping up LED production quickly – two examples of new industries where low-cost labor and economies of scale must be augmented by highly efficient production for the technologies to become truly competitive – machine vision is likely to find greater traction than it has done thus far.

Like the KMVIA, the CMVU is a new organization. Having been inaugurated just a few months ago in March 2011, Yang is hoping to attract 60 corporate members by the end of this year, and the CMVU is aiming to publish its first major report on the size of the domestic market by the end of 2012.

Clearly, there are major opportunities for the machine vision industry that can be unlocked by a growing awareness and understanding of the technology in Asia – a trend that will be of major benefit to makers of light sources, cameras and optical components, three of the key elements in any such system. According to Andreas Breyer, director of market research at the European Machine Vision Association (EMVA), camera sales account for nearly one-third of the total machine vision market.

New technologies; new applications
While growth in Asia provides much of the future opportunity in this sector, new technologies are going to be another major market driver. Some of those technologies are migrating from other application areas, most notably 3D vision systems that have their roots in consumer technologies like televisions and Microsoft’s Kinect games console. In fact, there are three major approaches to 3D vision – triangulation methods such as stereo vision; interferometry; and time-of-flight measurements.

Arguably, 3D is something of a gimmick in the consumer world, and far from pervasive. But in machine vision the applications are genuine – for example the 3D dental imaging system that won this year’s VISION Award. It is also easy to see how a 3D vision system could be applied to monitor the shape and quality of automotive components on the car production line, and exhibitors in Stuttgart such as Stemmer Imaging showed a number of examples of the technology.

Another technology set to migrate from another sector is optical coherence tomography (OCT). Now widely deployed in ophthalmology, with an estimated 20,000 such systems already in operation, a team of developers from the IMEC spin-out Xenics thinks that OCT will have a major opportunity in industrial production within a few years. Hervé Copin from the company, which is a world-leader in infrared detector technology, sees industrial applications booming once a product is fully ruggedized, likely in two or three years’ time.

Machine vision in the vineyard?
In the opposite direction, the VISION show highlighted the potential of “industrial” optical imaging technologies for life sciences applications with a “medical tour” on its trade show floor. In addition, IMEC’s Murali Jayapala highlighted how early studies on hyperspectral imaging showed the potential for a range of diagnostic applications, from melanoma detection to general health monitoring.

One of the problems is that even state-of-the-art hyperspectral systems tend to be slow, expensive, and need bulky optics. IMEC’s latest approach is a compact, low-cost system based on integrated Fabry-Perot filters and a CMOS detector that works at high-speed (more than 25 frames per second). Said to perform well in ambient light, the IMEC prototype imager is just a cubic centimeter in size.

As well as expanding geographically and technologically, there are also signs that machine vision technologies are infiltrating new applications not traditionally regarded as “industrial” – for example in agriculture. One example of this is highlighted by one of the receipients of Edmund Optics’ recent research and innovation awards. 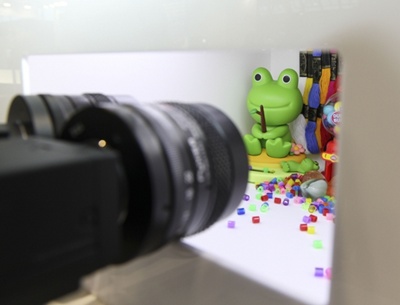 Verónica Sáiz-Rubio, from the Polytechnic University of Valencia in Spain, won third place in the European version of the competition for her research towards monitoring the vigor of vineyards, by fitting a tractor with a near-infrared imager that can be used in conjunction with GPS navigation to produce a “vigor map” of a small or medium-sized vineyard without the expense of airborne remote sensing. Given the Germans’ experience in machine vision, perhaps the Trollinger vineyards in central Stuttgart might provide the ideal location for a follow-up study?

In short, machine vision looks like being a serious growth market in the years to come, providing a major opportunity for vendors of cameras, sensors, optical components and light sources alike. Growth will result from four key trends: expansion of industrial applications into Asia; adoption of new optical technologies like 3D sensing; the transition of industrial sensing into medicine – and vice versa; and the migration of “industrial” technologies into other fields such as agriculture. Like the vineyards, this is an application sector that looks set to grow and grow.