With the US now adopting a first-to-file patent system, Paul Davis will guide attendees through the implications for photonics. 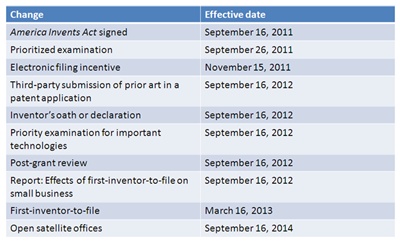 Changes to US patent law - timeline (click to enlarge)

From high-profile spats like Apple versus Samsung, to more parochial matters like the recent IMRA America vs IPG Photonics case, there’s no denying the influence and impact of a strong intellectual property portfolio – that and a good legal team, of course.

In September, President Obama’s signature on the America Invents Act (link to full text) set in motion what the White House has described as the most significant reform of the US patent system for more than half a century. For a summary, click here.

Those long-awaited changes are aimed at harmonization with key trading partners, speeding up the filing process, reducing a backlog of close to 700,000 applications in the system, and cutting the likelihood of a dispute ending in drawn-out litigation by offering new ways to establish and challenge patent validity.

But what will all this actually mean in practice for photonics companies and budding entrepreneurs? Paul Davis, a partner in the business law department at Goodwin Procter in Menlo Park, California – and previously at the laser company Spectra Physics – will focus on the implications in a presentation at the Photonics West 2012 conference and trade show early next year.

For Davis, the key change is the switch from a first-to-invent to a first-to-file system. That, he explains, will not only harmonize the US with Europe and Japan, but greatly reduce the burden on smaller companies looking to protect their inventions.

“To prevail in a first-to-invent system is a real challenge,” Davis told optics.org. “You need to be able to prove that through evidence and corroboration, and that’s difficult for a sole inventor. It’s something that can cost several hundreds of thousands of dollars.”

Small company benefits
Davis believes that the changes to the system will benefit smaller companies in particular, not least because in the more efficient system it will become much easier for them to challenge patents through an in-house appeals process, rather than through the courts.

And even though the first-to-file element of the act does not become effective until March 2013, Davis is now suggesting to clients that they file their patents early to take advantage of the pending changes.

Under the new system a fast-track option will guarantee patent reviews for what those companies consider to be their key technologies within one year (under the current system the typical wait time is more like three years), for a small additional fee. A “prioritized examination” option came into force within days of the Act’s signing, while the “priority examination for important technologies” element is set to become effective from September 2012.

Also coming into force at that time will be the “post-grant review” process – a measure that is designed to allow challenges to patents to be resolved in-house by the US Patent and Trademark Office (USPTO), rather than through the tortuous, expensive route of court litigation that is simply not an option for many smaller companies.

Davis is particularly happy to see this part of the process change. He described the old system as “very broken”, largely because of the limited resources available in terms of USPTO examiners, and sees the new approach as one that will help inventors as they look to attract venture funding: “We needed to reduce the cost of litigation, which is absurdly expensive in the US. I really believe that this will level the playing field,” he said. “Venture capitalists do not want to buy legislation.”

Whether the USPTO is able to meet its goals of cutting wait times and patent litigation remains to be seen (establishment of at least three ‘satellite’ offices to provide additional processing power are only slated for September 2014 – and even then will be subject to available resource), but what certainly seems true is that the harmonization with much of the rest of the world will make it easier for US inventors to simultaneously market products in the US and for export.

“Expanded work-sharing with other patent offices around the world [will] increase efficiency and speed patent processing for applicants seeking protection in multiple jurisdictions,” stated the White House of what is seen as another important change.

Paul Davis will present a talk entitled “Changes to Patent Laws” as part of the Photonics West 2012 “Industry Events” track at 8.45am on Thursday January 26. The track is open to all attendees.