Only a handful of publicly listed companies showed any gain in value in Q3 2011, although the industrial laser sector still looks strong. 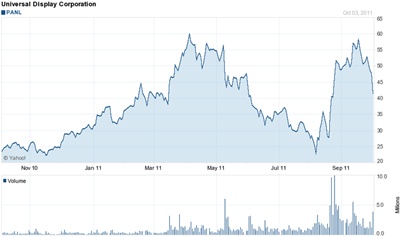 Just five out of 55 photonics company stocks surveyed by optics.org showed a gain in the third quarter of 2011, as the macro-economic anxiety sweeping the world’s equity markets took its toll on all sectors.

By far the strongest performer between July 1 and September 30 was the organic LED materials developer Universal Display Corporation (UDC), which was buoyed by new licensing deals with key customers Samsung, which uses OLEDs in many of its smart phone and tablet designs, and PPG Industries.

Shares in UDC gained 36% in the measured period (July 1-September 30), and have jumped 56% in the year so far – although on October 3, the first trading day after Q3 finished, UDC fell 13% on wider worries and apparent rumors about the precise nature of the Samsung licensing arrangement.

As recently as August, UDC’s shares had also plunged in value, dropping to just $22.80 on August 8 as fretting investors waited for news of a new Samsung arrangement. Just six weeks later UDC peaked at $58.60, and the more recent falls suggest a certain degree of profit-taking from investors who made sharp gains over such a brief period.

Semicap concerns
While each of the remaining 50 stocks surveyed lost value in Q3, a number of large-cap firms did at least out-perform the Nasdaq composite index, which dropped 14% in the quarter. Among those was ASML, which remains the most valuable photonics company by market capitalization, worth close to $15 billion.

Other relatively strong performers included component and module maker Finisar, down only 7% in the quarter, and semiconductor capital equipment firm KLA-Tencor, which dropped 8% in the quarter and is down only 1% in the year to date, despite continued uncertainty about a potential downturn in the semiconductor sector next year. 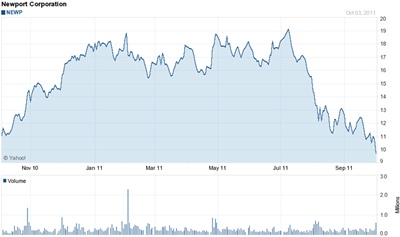 Longbow Research equity analyst Mark Douglass has responded to the general malaise impacting equities by reducing his target prices on a number of photonics stocks, and by downgrading Newport from “buy” to “neutral”. However, Douglass remains confident of the industrial lasers sector in general, having just returned from an upbeat Lasers for Manufacturing Event hosted by the Laser Institute of America (LIA) in Chicago, a new show prompted by requests from key systems companies including Trumpf.

“Attendees were very upbeat about the rest of the year with many at record sales levels, though clearly the disconnect between the markets, housing and employment data and robust demand for photonics equipment is leaving many scratching their heads and concerned with respect to 2012,” Douglass wrote in his latest report.

“Quoting activity remains high and most have seen no evidence of a slowdown with end users continuing to invest in lasers, for example automotive, aerospace, packaging, medical device, pharma, construction equipment, power generation, and appliances. That being said, given the rash of negative economic news and the Eurozone crisis many are wondering just how sustainable current sales levels are.”

Litigation
One stock showing some recent jitters is IPG Photonics. Though it is still up on the year, both the wider macro-economic environment and the ongoing jury trial with IMRA America over patent infringement relating to fiber lasers appear to be taking their toll – IPG fell from $62.90 to just over $40 in the second half of September alone, and at the time of writing there is no clear signal as to the outcome of a trial that could prove costly.

For his part, Douglass remains confident that fiber lasers will continue to displace more conventional industrial laser systems, although he also points out that any wide-scale shift from CO2 lasers to fiber lasers for cutting medium-to-thick sheet metal is yet to materialize.

One area where fiber lasers are making real progress is in automotive manufacturing, Douglass adds, citing Ford and Chrysler as among those continuing to invest in high-power fiber lasers for body assembly applications, displacing the resistance spot-welding process that has dominated for many years. As the undisputed market leader in the high-power end of the fiber laser business, IPG is the key beneficiary here.

Although Newport’s profitability has been stepped up by management actions over the past couple of years, and the company will benefit from another profitable operation and significant diversification with the Ophir acquisition, Douglass’ concerns are that the company still tends to trade in line with expectations of the semiconductor capital equipment sector – and the analyst believes that the risk of a “stall out” into 2012 for this market has now increased.

Strong balance sheets
Douglass still rates Coherent, Rofin-Sinar and II-VI as “buys”, although he has now lowered significantly his 12-month price targets for each of those stocks. The analyst sees Coherent as having a very strong balance sheet - featuring $267 million in cash and other liquid assets, and very little debt – supporting either share repurchasing or acquisitions in a market where equities are looking increasingly cheap.

Rofin-Sinar was one of the weakest performers in Q3, losing 44% of its value, and is down a similar magnitude on the year so far. Currently trading at around $19, Douglass has slashed his price target for the stock from $38 to $28 – although he describes the current Rofin sell-off as “overdone”. “[We] still believe that lasers for material processing have long-term upside and will prove to be more resilient than other capital goods, even if there’s a double-dip,” wrote the analyst.

Like Coherent, Rofin boasts a relatively strong balance sheet, and Douglass believes that there are signs that its high-power fiber lasers, through subsidiary Nufern, are gaining early traction. “Nufern is growing its marking fiber laser business and believes it is just as competitive, if not more so, than IPG,” Douglass suggests. “Sales are healthy enough that Nufern is adding people and expects that it will continue to add capacity in FY12.” 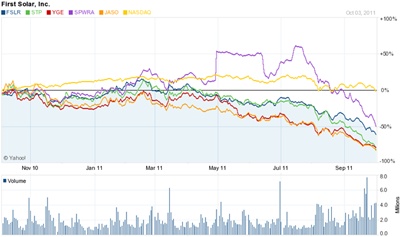 PV sector hit hardest
Joining Rofin in the lower reaches of the Q3 survey were a number of solar photovoltaics companies. The PV sector has been largely hammered in recent months as the industry goes through a major shake-out caused by rapid falls in the price of crystalline silicon wafers, cells and modules in combination with slack demand in key European markets.

The Chinese trio of Yingli, JA Solar and Suntech Power – among the largest solar producers in the world – propped up the other 52 companies at the bottom of the optics.org survey, with each losing close to two-thirds of their value in Q3 and down by similar magnitudes in the year to date. US-based SunPower and Germany’s Q-Cells have fared little better, with Q-Cells now virtually valueless.

Meanwhile First Solar, one of the only PV companies that has been able to cope with the rapidly falling cost of silicon cells and modules, has lost half of its value in the latest quarter. Though the company remains one of the leading global PV firms, and is without rival as the world’s largest manufacturer of thin-film CdTe solar panels, the cut-throat pricing environment has nevertheless eaten into its profit margins.

Of the UK-based photonics companies that showed very strong performance in the first half of 2011, Andor Technology remains up 41% on the year despite losing 9% of its value in Q3, while e2v Technologies is now up only 8% on the year after shedding 30% in the latest quarter. Meanwhile the LED lighting specialist PhotonStar LED, a spin-out of the University of Southampton, remains 31% ahead on the year to date, having lost only 10% of its value in the latest quarter.