Lemoptix and Hamamatsu hook up on MOEMS 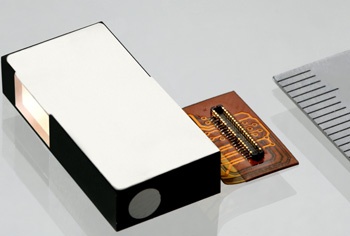 Under the deal, the two parties will aim to develop, industrialize and commercialize devices based on micro-optical electro mechanical systems (MOEMS). Venture-backed Lemoptix, which span out of EPFL in 2008, has developed a MOEMS-based micromirror that forms the key element of its “MVIEW” microprojector platform.

Meanwhile Hamamatsu has its own MOEMS product line, as well as a new MEMS and integrated optics manufacturing facility with wafer-scale assembly capabilities – and sees the deal as an opportunity to move into some large new markets for optical devices, such as that of smart phones.

Marco Boella, Lemoptix’ co-founder and CEO, said: “Our partnership is an exciting mix of Swiss innovation and Japanese manufacturing excellence. We look forward to seeing a new generation of Hamamatsu Photonics products based on Lemoptix technology being marketed to Hamamatsu Photonics’ broad and global client base.”

Lemoptix says that its “LSCAN” micromirror is already being used in laser printing and industrial sensing applications, while its MVIEW projector has been validated by “leaders in the automotive industry” for potential use in head-up display (HUD) systems. The company claims that MVIEW, which measures just 5 x 12 x 25 mm, is the world’s smallest optical projection engine.

Mobile market beckons
The big application that Lemoptix and others are targeting with such systems is the mobile device market, in particular that for smart phones – where an integrated laser microprojector capable of high-quality video reproduction is regarded as an obvious future step by many. With the annual smart phone market heading rapidly towards 2 billion units, the potential value here for suppliers of optical engines is enormous – although they have been hampered by the lack of a suitably compact and reliable direct green laser thus far.

Lemoptix sees further applications in other high-volume markets such as laptops and digital cameras, again for users to share high-quality image and video content.

Koei Yamamoto, manager of Hamamatsu Photonics’ solid-state division, said in a statement announcing the collaboration: “Hamamatsu Photonics recognizes the significant achievements of the Lemoptix engineers in developing technology that meets application-specific requirements and making the products ready for industrialization.”

“Building up knowledge based on market demand is an ongoing process and a highly technological interdisciplinary challenge which will be further improved by combining Lemoptix engineering with our manufacturing capabilities and experience.”

Lemoptix was founded by Boella and current CTO Nicolas Abelé after more than a decade of research on MOEMS mirrors at EPFL led by Philippe Renaud, with industrial projects starting in 2003. Company investors listed on the Lemoptix web site include EPFL, the Gebert Rüf Foundation, VentureKick and the Canton of Vaud.