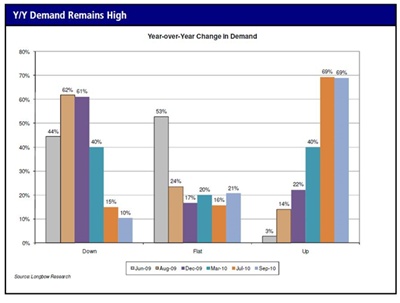 Many of the major players in the optics and laser sector are now feeling positive about the immediate future, although pricing pressures remain severe. Of the vendors surveyed by analysts at Longbow Research, Ohio, only 10 per cent had faced a decline in year-on-year demand during the third quarter, an improvement over the 15 per cent who had said the same in July.

Sixty-nine per cent were able to report increased year-on-year demand, a figure unchanged from three months ago. On the face of it, this indicates a slowdown in the rate of recovery, but perhaps more importantly a degree of sustainability.

The number of Longbow's contacts expressing a positive overall outlook was virtually unchanged, inching up from 60 per cent in July to 61 per cent now, although several are now daring to expect double-digit growth in the final quarter of the year, and even into 2011.

Certain low-energy laser sectors are enjoying low- to mid-teens growth already, with marking and engraving applications looking particularly buoyant and providing cheer for suppliers such as Coherent, Rofin-Sinar and IPG Photonics. Demonstrating that laser applications need not be either high-end or the preserve of those with large capital expenditure budgets, Longbow's findings indicate that companies of all sizes are purchasing laser systems as an economic way to mark their products.

Mixed sentiment
The generally positive outlook in Longbow's findings sits alongside continued price pressure, something that has become even more severe over the last quarter, particularly in industrial applications. Of the companies surveyed, 45 per cent had felt enough pressure to discount prices by 10 per cent or more, as the uncertain recovery began.

There is certainly a mixed sentiment among the analysts covering the laser sector, with some market surveys finding reasons to be more pessimistic. While the prevailing mood remains one of cautious optimism, vendors to not want to get ahead of themselves, according to Longbow.

"A lot of these differences are simply down to uncertainty, but I also think there is an unwillingness among [some] vendors to feel too optimistic," commented Mark Douglass from Longbow. "There are certainly several areas that do still look depressed through 2011. Another element is that people are looking at 2007-2008 sales levels for their comparison, and even with strong growth this year many are only up to 2005 or 2006 levels."

High-powered competition
Certain trends are becoming undeniable, however. The signs are clear that demand for fiber lasers in high-power applications is increasing. "Sales of fiber lasers are currently driven by a mix of customer pull and machine builders not wanting to miss out," noted Douglass. "The more OEMs talk about fiber lasers and learn how to use them, the faster they get adopted by the user base, and the faster that the demand becomes more pull than push. Now that markets are improving, I think that the growth in fiber lasers will prove to be stable." 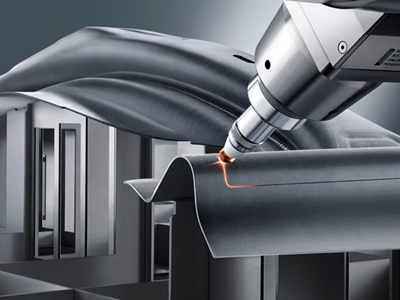 All of which is good news for IPG Photonics, the clear leader in fiber lasers. Competitor high-power laser products are yet to make much of a dent in IPG's position, says Douglass: "IPG has an installed base, 'first-mover' status, and a demonstrable reliability record. But the biggest reason for its position is probably the pricing power that it has, keeping other high-power sources at a higher price."

The sector is becoming increasingly active, with alternative high-power products already available from the likes of Trumpf and Rofin-Sinar, and competitor fiber laser products expected to appear from Coherent and JDSU during the first half of 2011.

The tussle between IPG and Trumpf will be worth watching, not just because of their alternative approaches to high-power lasers, but also their differing business models. "Only Trumpf appears to have made headway against IPG in high-power solid-state laser sales with its disk laser, assisted by a large customer base and its status as a turn-key machine builder," said Douglass. "IPG does not sell systems, inevitably adding to the time it takes for its product to gain traction. But in the longer term I think both suppliers will grow."

Green opportunities
While the general feeling is that the laser market is in recovery mode, there are still plenty of businesses inclined to push back their spending plans. Their reasons are based on a lack of political certainty across key consumer nations, uncertainty about tax rates in the US, and a desire for more convincing macroeconomic data.

Many have plans to exploit opportunities in the cleantech and renewable energy sector, a market where political influence is of particular importance. Longbow has detected a rising demand for lasers used in the manufacture of “green” automotive products, such as fuel cells and electric batteries, and attributes this directly to government subsidies and political pressure. 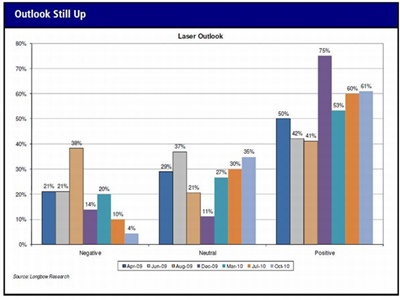 "This is a relatively new application area for lasers, one where they are an enabling technology, or at least a cost-effective manufacturing technique for various components in fuel cells and electric cars,” commented Douglass. “Manufacturers are tooling up and using laser systems in the production process, mostly employing either fiber or CO2 laser systems. But the sector is definitely political, and these investments are unlikely to have been made at all if not for US government subsidies and R&D money. While I think it's a near-term help, I don't see the long term viability. It's dependent on politics, and the winds are shifting to reduced spending."

Investor confidence will be another essential requirement for stability. Among the major vendors, Douglass suggests that Newport is particularly under-regarded by Wall Street at present - perhaps an unfair judgment colored by history. "Many investors remember Newport as a high-flying telecom stock in the days of the bubble, hitting almost $200 per share," he noted. "But, post-bubble, the company has made great strides in operating improvements, particularly with regard to its acquisition of Spectra-Physics, and it has demonstrated much-improved profitability. At present it's an under-appreciated story."