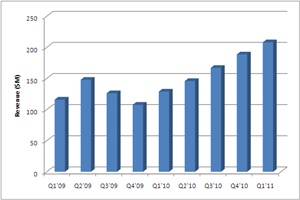 Whisper it softly, but, ten years since the telecom bubble burst, we may be about to witness another boom in sales of optical components for communications infrastructure.

Analysts at Lightcounting, which specializes in forecasting the market for photonic devices used in telecom and datacom applications, reports “very strong demand for optical components and modules”. Since that demand is a leading indicator – components are ordered in advance of widespread system deployment – the market pull is an early indicator of industry-wide recovery, it says.

“The industry momentum is clearly positive in 2010,” announced Lightcounting, despite only modest growth in sales of telecom networking equipment. “Sales of datacom systems picked up promptly in 2010, as businesses re-started upgrade projects delayed by the economic downturn.”

According to Lightcounting’s forecast, sales of optical transceivers in 2010 will increase 16 per cent on the 2009 figure, to reach $2.4 billion. Sales of Ethernet and Fiber Channel modules will increase at a similar rate, as will those for dense-wavelength division multiplexed (DWDM) transceivers.

The knock-on impact of an explosion in demand for wireless data services is also being felt, the analyst said. “We also see increasing use of optical connectivity in wireless infrastructure to support the bandwidth needs of new 3G and long-term evolution (LTE) networks,” Crozier commented.

Positive impact
The impact of all that demand should be very positive for suppliers of both active and passive optical components, including ROADMs (reconfigurable optical add/drop multiplexers), pump lasers and amplifiers, sales of which are already growing well ahead of the overall market in 2010.

“This suggests that a new cycle in infrastructure upgrades may be starting now, since these devices are typically used in the early stages of network installations,” Crozier added.

The Lightcounting predictions certainly appear to be in line with recent financial results from some of the key companies supplying optical components and modules for the telecom and datacom markets. Over the past 18 months – since its merger with Avanex - Oclaro (formerly Bookham) has seen quarterly revenues grow from close to $70 million to well in excess of $100 million.

Oclaro has also expanded its reach into the industrial and medical markets recently, following its acquisition of the Tucson-based Newport Spectra-Physics laser diode business in July 2009 - where the company has just opened a new design center.

Over the same period, Finisar’s quarterly revenues have grown from around $110 million to more than $200 million. Though that increase has much to do with Finisar’s acquisition of Optium, the company has also witnessed very strong demand for its ROADMs and wavelength-selective switches (WSS).

Meanwhile, the stock prices of both Oclaro and Finisar have doubled over the past 12 months.