As quarterly revenues reach an all-time high and orders continue to grow, shares in the diversified optics and laser vendor reach a three-year high. 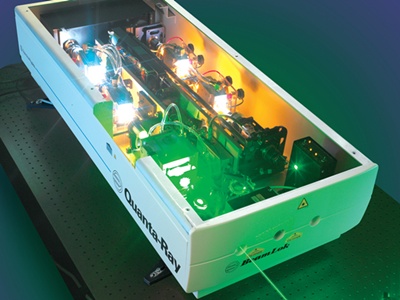 Laser and photonic component vendor Newport posted record quarterly revenues in the third quarter of 2010, as the company’s key markets of microelectronics, scientific research and life sciences all remained strong.

At $125.2 million, revenues reached an all-time high, while orders continue to grow as the California-based company registered a book-to-bill ratio of 1.09. Newport said that orders in the quarter represented the second-highest figure in the company’s history, and the company now has a backlog of $132 million.

Saying that the performance reflected strength in each of Newport’s target markets, CEO Robert Phillippy described the overall environment as “increasingly positive”. He now expects Newport to post full-year sales of $475 million for 2010 – a figure that would represent a 30 per cent rise on the depressed 2009 total. “We have capitalized on our opportunities,” Phillippy said.

Phillippy added that there is significant upside potential for Newport in the photovolatics sector during 2011. “Momentum is improving,” said the CEO, while pointing out that Newport does not just provide laser systems for solar cell manufacturing – it also provides solar simulators, motion control systems and test and measurement facilities. With production of thin-film photovoltaics based on non-silicon cells expected to ramp up significantly in the next 12 months, the company will have opportunities to grow this sector further.

Another “green photonics” sector growing quickly right now is high-brightness LED production, and Newport has designs on this market too. Phillippy confirmed that Newport has developed products for the LED space specifically, and with large-scale capacity expansions and new facilities under construction around the world, this ought to also present a big sales opportunity during 2011. Overall, Newport estimates that the microelectronics sector, including photovoltaics, presents an available market worth $1.8 billion.

Research funding
The picture in the research market remains mixed – while many governments around the world are taking an axe to public spending, a number are protecting, or even increasing, investment in scientific research. However, with stimulus funding in the US now largely wound-down, the upside for Newport in the research field certainly appears limited. Including aerospace and defense applications, the company sees a total available market worth $850 million in scientific research. 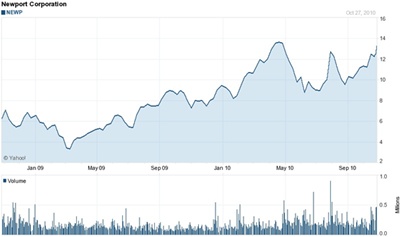 On the life sciences front, Phillippy said that Newport’s revenues have outperformed the typical 7-9 per cent industry growth rate over the past year, while the company has recently agreed volume orders for products tat have been under development for two years. Though order patterns may become more volatile as a result, the long-term picture for applications such as flow cytometry and multi-photon microscopy looks good and the market is valued by Newport at $650 million.

Having streamlined its operations during the downturn, the strong upturn in sales throughout 2010 has seen Newport post some impressive profit numbers and allowed it to put plenty of cash in the bank – the company expects to have $180 million in cash and equivalents on its balance sheet by the end of this year. Newport’s priority for that cash remains the repayment of a $121 million convertible debt that comes due in February 2012, although acquisitions to expand the company portfolio are likely to feature as well.

Longbow Research, which covers many of the companies active in the laser sector, remains convinced that Newport is undervalued by Wall Street, perhaps a lingering hangover from the telecoms bubble that burst nearly a decade ago. But following the latest results announcement, Newport’s stock price jumped 10 per cent in early trading to $14.75 – a three-year high.