Inside Intel's photonics revolution – part one

Mike Hatcher talks to the architects behind the photonics technologies that Intel believes will revolutionize computing. 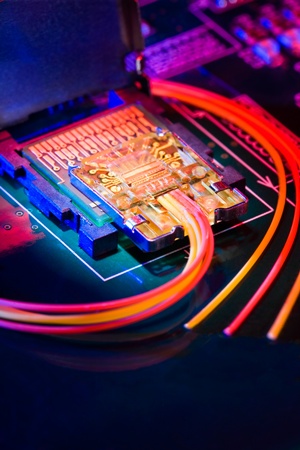 The company that has made itself famous for being "inside" your PC will soon be on the outside as well. Of course, "Intel Outside" doesn't yet have quite the same ring to it. But with the development of two distinct technologies that are based on optical – rather than electronic – data transport, Intel is promising to revolutionize the way that chips talk to each other, and the speed at which they do it.

Two of the key men behind that revolution are Victor Krutul and Mario Paniccia. And the two are not just colleagues – firm friends, says Krutul, they live just a couple of blocks apart and enjoy a close working relationship that goes back many years.

That relationship has been central to Intel's two key developments in photonics technologies: Light Peak and silicon photonics. Not that these technologies should in any way be confused, as Paniccia is keen to stress.

Light Peak, based on conventional photonic components like VCSELs and InGaAs IR photodetectors, is now in the final stages of commercial development, to be launched on an expectant but perhaps skeptical early-adopter consumer base in early 2011. As the director of Intel's optical development team, this comes very much under Krutul's commercial operation.

Paniccia, meanwhile, is the driving force behind silicon photonics. And while this technology might also be based on photons, that is pretty much where any similarity to Light Peak ends. Still at the research stage, and unlikely to debut commercially before 2015, this is a far more revolutionary development. With silicon photonics, Intel is challenging the conventional wisdom when it comes to laser light generation, detection and control.

Light Peak: the ultimate USB?
While it's long been recognized that photonic technology could easily provide for much faster data links, the big problem has always been the cost of doing it. Optoelectronic components operating at speeds in excess of 10 Gb/s are typically manufactured with strict industry standards such as Telcordia in mind, and the high performance demands are reflected in the price of optical modules.

Rather than come up with any revolutionary component technology, Intel's genius with Light Peak has been to figure out a way to deliver that kind of link speed at a price point that OEMs such as Nokia and Sony will deem acceptable to a tech-savvy customer base of early adopters.

Both Krutul and Paniccia describe a "Eureka moment" in the evolution of Light Peak. What they suddenly realized was that a single, optical connector could perform all of the tasks requiring connection to a PC – provided it operated at 10 Gb/s.

So why 10 Gb/s? Krutul explains: "Well, Mario and I were having a meeting where we were thinking about how we could get to 5 Gb/s. But the crucial piece of thinking – the ‘a-ha’ moment – was to make the technology multi-protocol, in other words to make it the ultimate USB." 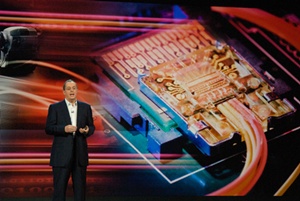 "This includes the SVGA connector, which is the one that really defines how thin a laptop PC can be designed. To do the display connector, you need to run at 10 Gb/s, so this became the 'magical' figure." One back-of-a-napkin calculation later, and optical technology was at the heart of the Intel program – using components that were already widely available.

Having decided to go optical, the major challenge then facing Intel's development team was the age-old one: how to produce the high-speed connections at a consumer-friendly price point? What Krutul realized was that the manufacturers of high-speed lasers used in telecom applications have to jump through hoops to meet Telcordia standards. That means extensive, time-consuming testing, operation over a wide temperature range, and module lifetimes of 20 years.

Light Peak, as it became known, just didn't need that kind of specification. A component lifetime of 5-7 years is plenty for consumer cables, while there is no need for humidity protection, or operation at below-zero temperatures – as Krutul notes, your PC battery will freeze when this cold, so your cable won't be much use anyway.

Even if this is an apocryphal tale, it illustrates the key point – wafer yields of around 30 percent are typical for Telcordia-specified components, and those that don’t meet the standard are next to useless for the manufacturers. Selling components for Light Peak from the same wafers would yield more like 90-95 percent, making the whole process far more cost-effective.

Then there are the volumes. Krutul won't say how many Light Peak cables he expects Intel's manufacturing partners to produce after the technology appears in early 2011, but if it is a hit with consumers, those volumes will be huge. The high-volume manufacturing techniques that have been applied to Light Peak will enable one cable to be produced every ten seconds, equivalent to 30 million per year.

"We ship 150 million CPUs per year," says Krutul of Intel's dominant position within the PC market. "So even a 10 percent chunk of that would be highly significant for optics. Revolutionary."

As a former Apple man, Krutul has a strong grasp on consumer wants and needs. Indeed, search the web for Light Peak and you will find plenty of rumors that Apple approached Intel with the idea in the first place. So does he really think that Light Peak will signal the end of the road for the USB?

"I imagine a future laptop with three or four Light Peak connectors – rather than eleven or so different ones that you might see at the moment. But I also see Light Peak and USB 3.0 co-existing, perhaps even on the same platform. Initially we will see Light Peak in the high-end PCs, before it drops down to the mid-range and even budget levels in 5-7 years' time."

While that sounds ambitious, it's worth remembering the speed with which wireless connectivity has become ubiquitous. Products based on Intel's Centrino platform were aimed at early Wi-Fi adopters as recently as 2003. Just a few years later, and a lethargic wireless connection is enough to frustrate even the mildest-mannered PC user. 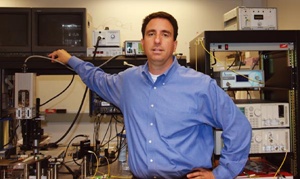 Standards
Another criticism that might be leveled at Light Peak concerns standards – just how can it take over from USB without industry-wide standards being adopted? Again, Krutul cites the experience that Intel had with Wi-Fi and Centrino. "We are talking to the industry about standards," he says. "But we have had inconsistent feedback. Intel is customer-driven, rather than standards-driven, and our customers want it as soon as possible. And remember - Wi-Fi wasn't standardized when we launched the Centrino. Just look at what happened there."

One standards issue that Krutul does see as critical is the need for backwards-compatibility, and this is one of the key reasons why Intel designed InGaAs detectors into the Light Peak reference. While direct-modulated 850 nm VCSELs are being used in the first generation of products (two in each connector, along with two detectors), this might change in future generations.

The speed of directly-modulated VCSELs has proved difficult to advance much beyond 20 Gb/s so far – at least at a price that would be compatible with Light Peak – and so Intel might consider migrating to 1310 nm DFB lasers for future generations, depending on what the next speed bump beyond 10 Gb/s turns out to be. InGaAs has a wide response in the infrared spectrum, ensuring that if this does happen, the new Light Peak connectors would be backwards-compatible.

While specific product launches featuring Light Peak are yet to be announced, Intel maintains that early 2011 will see the first commercial availability of the platform, with the expectation of a major production ramp in 2012. Consumer electronics OEMs will be able to work with different supply chains. Intel's reference design is being implemented by both Avago Technologies and the TDK subsidiary SAE, with Avago offering a largely integrated supply chain, making its own VCSELs and photodiodes. SAE, on the other hand, out-sources VCSEL production to Oclaro and uses photodiodes made by the Canadian company Enablence Technologies. The only parts directly supplied by Intel for Light Peak will be controller chips.

Early adopters
Officially, Light Peak has only been designed for PC applications. However, it appears likely that applications in higher-end markets will follow – perhaps in servers, data centers and healthcare environments, where the electromagnetic interference inherent to electronic connectors is undesirable.

But for the PC users who become the early adopters of this technology, the speed of the link will be unlike anything they have previously experienced. Krutul anticipates that the transfer of high-definition video will dominate early use, for example by enabling cinema-quality video editing on a conventional laptop PC, instead of specialist equipment. In time, he sees consumers hooking up smartphones to large TV displays, and the development of intelligent docking stations that could "soup up" a simple laptop PC with the processing power of a high-end workstation – simply by connecting to a faster CPU and larger memory via a Light Peak cable.

And that potential to effectively re-design the PC architecture is what really excites Krutul and Paniccia. "There is an opportunity to revolutionize not only the architecture of a PC, but the way that we interact with computers," says Krutul. Paniccia simply sees optics moving wholly into the mainstream: "What this all means is that optics, optical interconnects, is coming to the mass market."

The ultimate aim that the two of them have is to take the scalability that has been achieved by the semiconductor industry, and marry it to the sheer speed of optical technology. With Light Peak, they look to be bringing high-end photonics to the masses.

Part two of "Inside Intel's photonics revolution" will focus on the development of silicon photonics.