Micro-LEDs: a box of tricks for all occasions 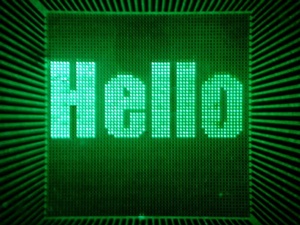 Last month, the UK’s Strathclyde University secured a £150,000 spin-out deal to form a company called mLED. The firm will commercialize microLED arrays based on gallium nitride (GaN), a technology that was developed in the university’s Institute of Photonics, and which could find applications as diverse as neuroscience, microscopy and communications.

Also known as micro-pixellated LEDs, microLEDs are devices that comprise thousands of tiny emitters producing light in a compact and integrated package. Unlike other micro-display technologies, microLEDs are pattern-programmable and do not require external components, such as optics and switching matrices, to modulate the light pattern, making them compact and efficient.

“There are only a few companies in the world that have recognized the opportunity and demonstrated capability in this area,” Jim Bonar, the CEO of mLED, told optics.org. “The power density, switching speeds and compactness of microLEDs are very important factors. The amount of interest we have had already has been phenomenal and from day one we have had sales.”

Box of tricks
mLED is currently offering demonstrator kits to allow potential buyers to test the microLED technology in their application. “The kit is essentially a complete subsystem and contains everything you need, including all the relevant software,” commented Bonar. “Depending on their application the customers receive a 64x64 matrix-addressable array, or an 8x8 individually addressable array. It is a good way for people who are already using an optical solution to test an alternative.”

In terms of the wavelengths that are available, Bonar says that mLED can offer AlInGaN microLEDs with a broad spectrum ranging from the UV right through to green. Yellow and red devices will also be available shortly, based on current work at the Institute of Photonics. “The university has been working on this since 2002, so we have a box of tricks and a lot of capabilities,” he added.

For example, the Institute of Photonics – which has granted mLED an exclusive license to the technology – has demonstrated a 128x96 array and emission wavelengths as short as 370 nm. Other performance characteristics include typical emission apertures of 20 microns and sub-500 picosecond switching speeds.

“The Institute has, in conjunction with academic collaborators, been directing activities in CMOS backplanes to make the devices individually addressable,” added Bonar. “We also have epi-up and flip-chip capabilities. We can etch lenses into the backplane to produce more collimated beams or perform post-processing to improve collimation.”

‘Optogenetics’
One application that could benefit from the ability to optically interrogate a sample is an area that Bonar inventively terms ‘optogenetics’. “This is a new application in neurotechnology,” he said. “Scientists are looking at the central nervous system and trying to improve their understanding of the neural network.” 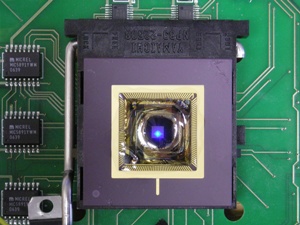 The application involves transfecting* certain proteins into the neural network, which allows researchers to target specific neurons. Using light between 450 and 470 nm activates the target neuron while longer wavelengths essentially switch the neuron off. The hope is that researchers can gain a deeper understanding of the neural network, and diseases such as Alzheimer’s.

“Another application is direct-write lithography because we can go down to UV wavelengths,” said Bonar. “Thanks to their fast switching speeds, microLEDs might one day be used for short range communication in intelligent homes of the future. The microLEDs can offer a huge amount of bandwidth and I could see the microLEDs adding functionality.”

• Braveheart Investment Group led the £150,000 funding round into mLED, investing via both the Strathclyde Innovation Fund (SIF) and the Alpha EIS Fund. Scottish Enterprise's Scottish Seed Fund also participated in the round. Major funding to create this opportunity was also obtained from the Scottish Enterprise Proof of Concept Fund and from the Engineering and Physical Sciences Research Council (EPSRC).

* the process of deliberately introducing nucleic acids into cells.