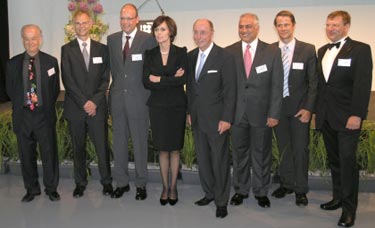 Federico Capasso accepted the 2010 Berthold Leibinger Zukunftspreis (the Future Prize) at an awards ceremony held in Ditzingen, Germany on 9 July, in recognition of his contributions "to laser technology with [his] research on the quantum cascade laser". This international award has been biennially presented since 2006 by the Berthold Leibinger Foundation for excellent research on the application or generation of laser light.

The Zukunftspreis, which includes €30,000, was just one of many awards given that night as a way to celebrate laser science and innovation. The award ceremony also recognized four other innovative groups and individuals for their work. While historically three innovators are recognized in addition to the Zukunftpreis award winner, this year the jury picked four for the Innovationspreis, awarding two second prize winners.

Majid Ebrahim-Zadeh of the Institute of Photonic Sciences (ICFO), Spain, won the third place award for his work on the continuously tunable femtosecond laser "spanning from the ultraviolet to the infrared".

The first group to receive the second place prize was Project Group UV for the Smart Grid, a collaboration between Coherent GmbH, Germany, and Bruker HTS GmbH, Germany, for "UV excimer laser technology: key to mass production of ceramic high temperature superconducting tapes". This innovation of a 600 W excimer-laser-based system for thin-film deposition makes the production of high-temperature superconductors practical, which carries immense potential for more energy efficient engines and for energy transmission.

The other second place prize winner was Karsten König, JenLab GmbH & Universtät des Saarlands, for "clinical multi-photon tomography". This technology has aided the early detection of malignant melanoma using laser-excited autoluminescence, and has recently been applied to nanosurgery and measuring.

The first place prize winners were Thorsten Trupke and Robert Bardos from University of New South Wales and BT Imaging Pty Ltd, Australia, for their work on "laser-based luminescence imaging of silicon bricks, wafers and solar cells," allowing for improved laser excitation and commercialization of solar cells, with the goal of enabling the photovoltaic industry to reach grid parity across the world.

Theodor W Hänsch, co-winner of the 2005 Nobel Prize for Physics for his contributions to the development of laser-based precision spectroscopy, presented a laudatory address of Capasso's contributions to the field and why he deserved this award. Capasso and his group at Bell Labs invented and first demonstrated the quantum cascade (QC) laser in 1994. By varying the thickness of the layers it is possible to select the wavelength at which a QC laser will emit light, custom designing it for a specific application. Capasso is the Robert L Wallace Professor of Applied Physics and Vinton Hayes Senior Research Fellow in Electrical Engineering at the Harvard School of Engineering and Applied Sciences. He is also a Fellow of SPIE. See a video of Capasso talking about his work from the Advancing the Laser celebration.

Capasso accepted his award and spoke about some of the current applications for the QC laser, including breath analysis for disease detection, atmospheric analysis, explosive detection and other homeland security applications, ozone measurements at the recent Olympic Games in Vancouver, and many others, as well as possible future applications. Capasso encouraged interaction among different disciplines to inspire greater innovation, and the need for supportive environments and culture within labs and research facilities.

Professor Bethold Leibinger closed the ceremony by congratulating the award winners and expressing the joy and fulfillment that supporting these awards brought him, and how incredibly rewarding it is to help people succeed in their scientific research and promote innovation.