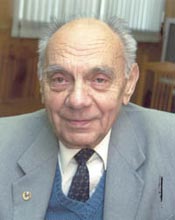 Academician Andrey L Mikaelian, a recipient of the Gold Medal of SPIE, died on 7 July 2010, at the age of 85.

Mikaelian was a founder of the modern scientific school of radio-optics and made significant contributions to different fields of microwave ferrites, laser techniques, holography and neural methods of information processing.

During the early 1950s he proposed the idea of magneto-optical effects use for the creation of nonreciprocal waveguide devices, developed the theory of gyrotropic waveguides, and applied these new devices for communication and radio-location systems.

In 1951, long before the era of lasers, he proposed the first optical waveguide "SELFOC" and later developed gradient-index lenses. He pioneered optical waveguides, the wideband properties of which almost two decades later were successfully realized as fibre optic light conductors and came to be widely employed in optical communication systems.

Mikaelian later developed radio-optical methods of information registration and processing, based on principles of holography. He proposed the method of laser radiation mode selection, created the first single-mode lasers and optoelectronic devices, including the magneto-optical space light modulator (SLM). As a result, the first holographic memory systems were realized.

In 1992 he founded the Institute of Optical Neural Technologies of RAS and was the director of the institute for 10 years. In recent years he served as scientific superviser of IONT RAS.

Among his many national and international awards, Mikaelian received the 1994 SPIE Gold Medal of the Society for his pioneering work.

He was the author of more than 300 papers, numerous Russian patents and several monographs. He chaired many SPIE-sponsored meetings on optical memory and neural networks and edited several volumes of SPIE Proceedings.

He is survived by his son, Michael.