More than 2000 new papers on the most recent advances in the field were presented at SPIE Astronomical Telescopes and Instrumentation in San Diego, from 27 June to 2 July. The approximately 2000 members of the international astronomical instrumentation community who gathered in at the Town and Country Resort heard presentations ranging from a preview of giant, game-changing telescopes soon to be in operation, to a talk about the "unknowns and unknown unknowns" in the study of dark sky and dark matter, and much more.

Colin Cunningham, a past Astronomical Telescopes and Instrumentation symposium chair, was presented as a new SPIE Fellow at the Thursday morning plenary session.

Conference proceedings papers will be published individually in the SPIE Digital Library as soon as approved after the meeting, and also in collected print and digital volumes and collections.

Among the week's activities: 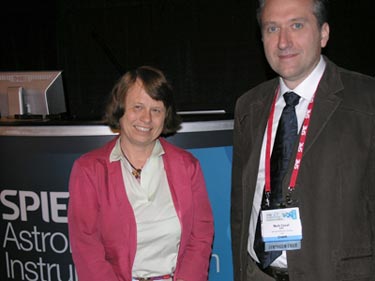 Ewine van Dishoeck (Leiden Observatory and Max Planck Institut für Extraterrestrische Physik), pictured with symposium co-chair Mark Casali (European Organisation for Astronomical Research in the Southern Hemisphere), gave a plenary talk reporting on the ALMA project under construction in Chile, and the impact the increased sensitivity and spatial resolution of its instruments will have on virtually all areas of astronomy.

In his banquet keynote talk at Balboa Park on "Four hundred years through the eye of the telescope," Jerry Nelson (University of California, Santa Cruz) previewed the giant telescopes that he said will advance capability along a sort of Moore's Law for telescopes. 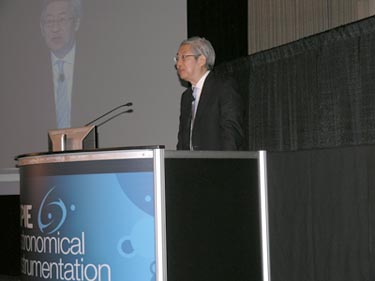 Thursday morning plenary speaker Saku Tsuneta (Hinode Science Center, National Astronomical Observatory of Japan) explained research including studies on solar cycles and the impact of solar activity on weather. The open-data Hinode mission studies the Sun with a solar optical telescope and an X-ray telescope, and was launched in 2006. Data suggests that the current solar cycle looks to be the longest in 200 years, and that we currently are in the quiet, or dark, portion of the cycle.