Current efficiency limits of 30% could be vastly improved by capturing "hot electrons". 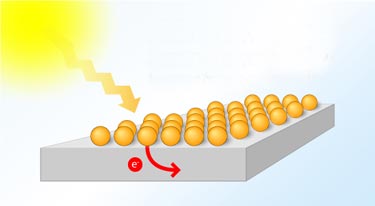 The efficiency of solar cells could be increased to more than 60% from the current limit of just 30% according to new work by scientists in Minneapolis and Texas. The new work involves capturing the higher-energy sunlight that is normally lost as heat in conventional devices using semiconductor nanocrystals, or quantum dots.

The maximum efficiency of conventional solar cells made from silicon-based semiconductors is limited by theory to around 31% – and the best performing affordable commercial devices are less than 20% efficient. This is because in typical devices, photons with energies above the semiconductor's bandgap generate "hot" charge carriers (electrons and holes) that quickly cool to the band edges in a matter of just picoseconds, releasing phonons (vibrations of the crystal lattice, or heat). If the energy of these hot electrons could be captured before it is converted into wasted heat, solar-to-electric power-conversion efficiencies could be increased to as high as 66%, say scientists.

The first step towards doing this has already been demonstrated – by research done in 2008 by Philippe Guyot-Sionnest's group at the University of Chicago who showed that hot electrons can be slowed down in semiconductor nanocrystals. Now, Xiaoyang Zhu at the University of Texas at Austin and colleagues at the University of Minnesota, Minneapolis, have discovered a second important step: how to capture the electrons before their energy is lost.

The team found that the electrons can be transferred from photo-excited lead selenide (PbSe) crystals to an adjacent electronic conductor made of titanium dioxide. The researchers demonstrated the effects in quantum dots made of PbSe but the method could work just as well for quantum dots made from other materials.

PbSe was chosen because it has an extremely large Bohr radius of 46 nm. This means that charge carriers in PbSe quantum dots (which are less than 10 nm in size) are strongly confined in the dots and that their electron wavefunctions extend well beyond the nanocrystal's surface. This "delocalization" allows electron transfer from the nanocrystals to an electron-accepting material placed nearby, such as TiO2. TiO2 was chosen because it is readily available as single crystals and can accept electrons easily.

The researchers began by making samples of one or two monolayers of PbSe quantum dots deposited on flat single-crystalline TiO2. The films were chemically treated with solvents to enhance electronic coupling between the two materials.

Zhu's team tested PbSe nanocrystals with diameters ranging from 3.3 to 6.7 nm. By using UV photoelectron spectroscopy and optical absorption measurements, the researchers determined the energy of the lowest excited electronic states in the nanocrystals. They found that these states were always below the TiO2 conduction band, which means that hot electrons from the quantum dot can transfer from the PbSe to the TiO2.

Aydil adds that much work still needs to be done before we see solar cells with efficiencies of over 60%. "I think all of us and everyone working in this field would caution against making predictions on when we will see (if ever) 66% efficient solar cells. However, if such high-efficiency solar cells based on hot-electron transfer are to be become a reality, we have shown the necessary first step."

The team will now attempt to detect the transferred electrons as current and make solar cells that exploit hot electron transfer, even if the efficiency is still low.

The work was reported in Science.