Structural colour of Papilio blumei recreated in the lab. 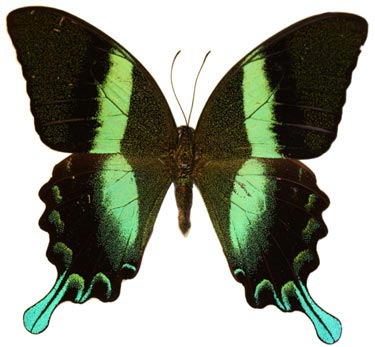 When it comes to head-turning fashion the animal kingdom often steals the show with its fantastic "structural colours" that can manipulate light in some weird and wonderful ways. One such beauty is Papilio blumei, a butterfly native to Indonesia, whose wings manage to combine green and blue in varying mixes depending on your viewing angle. This particular effect has now been mimicked by a group of researchers in the UK who say that their man-made structural colours could be added to bank notes to help prevent forgery.

At first glance the wings of Papilio blumei appear to be dominated by bright green coloured areas. Closer inspection, however, reveals that the wings are speckled with cavities that are yellow at the centre, gradually blending into blue at the tips. Light from the centre of the cavity is directly reflected whereas light hitting the edges is initially deflected towards a substructure in the cavity, which consists of alternating layers of cuticle and air. When it finally re-emerges, the light has been partially polarized and comprises a mixture of wavelengths, creating the effect of structural colour.

The mechanism of this colour mixing was detailed in a pair of papers published in 2000 and 2001 co-authored by Pete Vukusic at the University of Exeter. Ten years later Vukusic has teamed up with researchers at the University of Cambridge to recreate the effect in the laboratory. The researchers implanted plastic spheres, with diameters of just 5 µm, into a gold-coated silicon substrate, before blasting them away using an ultrasound etching technique. This left a number of dimples in the gold surface, which simulates the butterfly's wing cavities. The researchers then used atomic layer deposition to overlay 11 alternating layers of alumina and titania, which recreates the multilayer structures within the butterfly's cavities. Each layer of titania was approximately 60 nm thick and each layer of alumina was approximately 80 nm, where the sizes were chosen to match the green-yellow reflectance band of Papilio blumei.

Jeremy Baumberg, one of the researchers based at the University of Cambridge, says that it has taken 10 years to recreate the effect because of the intricate nature of the cavity structure. However, he says that the team's production process could be easily scaled-up to produce large quantities of materials that create these colour-mixing effects. He says that the effect could be reproduced using cheaper materials and the only reason gold was used is because his research group is also interested in plasmonics, a field of research involving the interaction of light with metals.

If these structured materials could be mass-produced they could be used to prevent forgery because many items now require some kind of official marker, from bank notes and credit cards to tickets for events. Baumberg believes that marking items with structural colours could offer tighter security than some of the established methods, such as watermarking and holograms, which have become easier to forge in recent years. "The difference is that our process is bottom-up – the final appearance of the colours is altered dramatically by just subtle differences in the initial production. Top-down technologies such as holograms can be quite prescriptive and therefore easier to mimic." 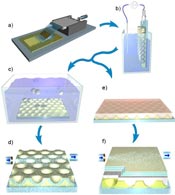 It is still not fully understood how Papilio blumei manages to develop its structural colours, partly because researchers do not yet have the microscopy techniques to get a detailed view of what is going on as the young butterfly develops inside its cocoon. Baumberg and his team are interested in exploring this question, but they are also interested in other animals and plants whose bodies include structural colours. There are many other examples, such as beetle shells and shrimp eyes, where evolutionary biologists believe that animals may have developed the ability to polarize light as a survival tactic.

This research is published in Nature Nanotechnology.