Results of new study should help in the design of more sophisticated photovoltaics. 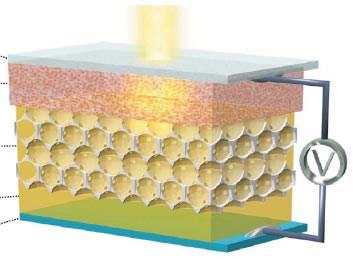 Photo of the solar cell electrode

Researchers in the UK and Germany have developed a new way to make dye-sensitized solar cells containing 3D photonic crystals. Although the devices are still far from competing with state-of-the art solar cells on the market today, they could be used to study how photonic crystals affect the light harvesting capabilities of materials that only weakly absorb light. The results should help in the design of more sophisticated photovoltaics in the future.

Photonic crystals are nanostructured materials in which periodic variation of the refractive index on the length scale of visible light produces a photonic "band gap". This gap affects how photons propagate through the material and is similar to the way in which a periodic potential in semiconductors affects the flow of electrons by defining allowed and forbidden energy bands. In the case of photonic crystals, light of certain wavelength ranges can pass through the photonic band gap while light in other ranges is reflected.

Most present-day solar cells use silicon as the active material but it is not ideal for such applications because it needs to both absorb incoming light and convert it into electricity. The silicon needs to be as thin as possible but the thinner it is, the fewer photons it absorbs, which in turn means fewer photons being converted into electricity. This ultimately reduces the efficiency of a cell.

Photonic crystals could come into their own here by "redirecting" unabsorbed photons back into the silicon. The photonic crystal layer would simply need to be "glued" to the back of a solar cell in the same way as metals like aluminium (the most widely used backing material in conventional solar cells). Not only does the photonic crystal reflect more light than aluminium, it also diffracts the light so that it re-enters the silicon at a lower angle. This low angle prevents the light from escaping the silicon, which increases the chances of it being absorbed and converted into electricity. 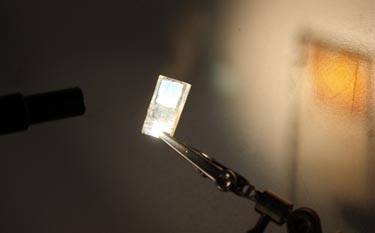 Nicolas Tétreault and colleagues at the University of Cambridge together with co-workers from Technische Universität München, have now put forward a new way to juxtapose a 3D photonic crystal overlayer on an underlying mesoporous titania layer. Until now, it was difficult to study how photonic crystals affect solar cell function because the chemical vapour deposition step needed to form the 3D photonic crystal blocked the mesopores of the underlayer.

Tétreault and colleagues began by spin coating a thin film of block-copolymer and TiO2 nanoparticles onto a conductive substrate. At this point, the mesopores aren't formed yet and the layer is dense and protected. Next, the researchers self-assembled a 3D photonic crystal on top of this layer using polymer macrospheres infiltrated with TiO2. Upon annealing, the mesopores form and the polymers, both in the under- and over-layers, are removed to reveal a 3D photonic crystal atop the mesoporous underlayer. This technique allows the pores to connect to the photonic crystal.

"The structure allows us to clearly distinguish how the photonic crystal affects light-harvesting in the dye-sensitized solar cell," Tétreault says. "Indeed we experimentally show the effect of localized resonances induced by the photonic crystal in the adjacent mesoporous layer." Although this effect had been predicted in theory before now, this is the first time that it has been seen in an experiment.

One more way to manipulate light

Unfortunately, the solar cells studied in these experiments do not compare well with those available to buy today. However, the results do mean that researchers can now study how photonic crystals affect the light harvesting of weakly absorbing materials. The concept is not limited to this particular technology and could find applications in other photovoltaic technologies of the future, says Tétreault. "What is important to note is that crystals give us one more way to manipulate light, and in this case harvest more solar energy," he adds.

And that's not all: photonic crystals are the only materials to date that preserve the transparency of a solar cell – something that could turn out to be a breakthrough when making windows that directly harvest light from the Sun.

The team is now looking at how the localized resonances behave once the thickness of the underlayer is increased. Until now, diblock-copolymer based dye-sensitized solar cells have been limited to very thin films because of cracking and delaminating as they get thicker. "However, the lead author of this study, Stefan Guldin, is working hard to remedy this situation," revealed Tétreault. "His work could lead to record-breaking efficiency when coupled with enhanced light harvesting strategies, such as those involving photonic crystals."

The work was reported in Nano Letters.