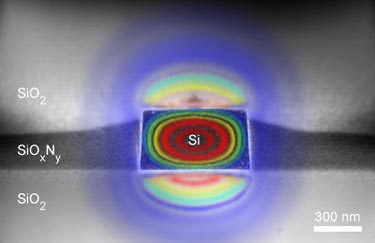 A new generation of efficient and ultra-compact nonlinear optical devices operating in the mid-infrared could soon be available thanks to researchers championing the properties of silicon nanophotonic waveguides. Having already created a silicon nanophotonic optical parametric amplifier (OPA) exhibiting broadband gain as high as 25.4 dB, the team from IBM says that further exploration is now vital (Nature Photonics doi:10.1038/nphoton.2010.119).

The heart of the OPA is a 4 mm long silicon waveguide with core dimensions of just 700 × 425 nm. One of the key nonlinear processes that the IBM team exploits is four-wave mixing (FWM). In general, FWM is a process by which four different optical beams interact with one another, resulting in an exchange of energy between beams, and also new frequency components. 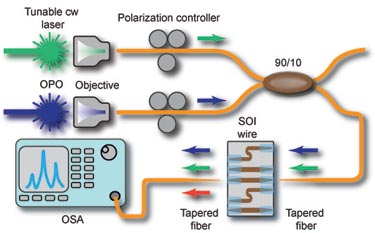 "In principle, all materials exhibit a nonlinear optical coefficient, and can produce FWM effects," explained Green. "However, as a comparison, the effective nonlinearity in our silicon nanophotonic waveguide is more than 10,000 times larger than that of conventional single-mode silica optical fibre used in fibre-optic networks. This large enhancement is what enabled us to amplify signals by nearly 400 times in a tiny silicon waveguide chip."

The OPA experiment uses a degenerate FWM scheme, in which two photons from a pump beam mix with a single photon from a signal beam, in order to produce an idler photon. In this case, the team injects picosecond pump pulses centred at 2170 nm together with a continuous-wave tunable mid-infrared signal and observes the output.

"By pumping an appropriately designed waveguide with a laser of sufficient intensity, this process can produce optical gain at both the signal and idler wavelengths, and can lead to on- and off-chip amplification, as we have shown," commented Green. "The dimensions of the waveguide were specifically engineered in order to achieve the necessary group-velocity dispersion characteristics required for broadband phase-matching."

Although the team has already developed an OPA with a broadband gain reaching 25.4 dB and a net off-chip amplification of 13 dB, it is looking to improve on these figures as well as move the research in new directions.

"We plan to look at ways of applying the large on-chip optical gain we've been able to demonstrate for particular applications, such as building a silicon mid-IR optical parametric oscillator (OPO)," said Green. "An OPO would involve using an on-chip resonant cavity to provide optical feedback, which when combined with optical gain, could potentially produce a multi-wavelength mid-IR laser source. Depending on the details of the design, this type of source could be constructed to be narrow-band, ultra-broadband and/or highly tunable."