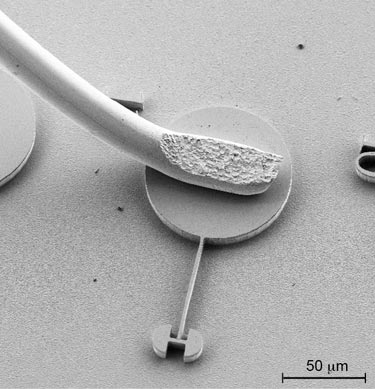 By combining ideas from microwave electronics with a gain medium, researchers at ETH Zurich in Switzerland have created the first laser to feature a cavity that is much smaller than the wavelength of light it emits. Although the longest dimension of the tiny electrically injected laser is just 30 µm, it emits at 200 µm and could prove useful for quantum optics studies as well as demanding applications such as radio astronomy. (Science 327 1497)

"It was not completely clear at the outset that this concept could be implemented," Jerome Faist from ETH's Institute for Quantum Electronics told optics.org. "But this truly is the first laser of its type. It can be made extremely small compared with the emitted wavelength and has a very flexible cavity design. We could scale the size of the cavity down even further."

Traditional laser cavities are based on Fabry-Pérot resonators where light bounces back and forth between two mirrors. The size of the cavity is limited to about a wavelength. "In our work, the optical cavity, required for feedback of the optical field, is replaced with an electronic resonator that gives an electronic feedback," explained Faist. 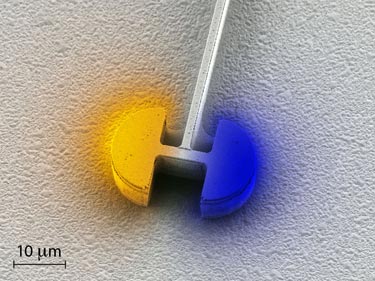 The ETH group uses an inductor-capacitor (LC) resonator circuit as a cavity. The resonator consists of two semi-circular shaped capacitors connected by a short line that acts as an inductor. A quantum cascade gain medium tailored to emit at 1.5 THz (200 µm) is inserted between the plates of the capacitors.

"Amplification of the electric field in the capacitor by the optical gain medium allows the resonator losses to be overcome, leading to self-sustaining laser oscillations," explained Faist. "This approach is especially well suited to an electrically pumped active region biased by a voltage applied between the metallic capacitor plates. A further reduction in size is possible by simply rescaling the size of the elements."

To test the performance of the LC laser, the team had to cool it to around 10 K to allow the active region to have sufficient gain. Standard voltage versus currents experiments revealed that the laser entered the threshold region at around 1.2 mA and had a maximum output power of around 80 pW at 1.55 mA. Above threshold operation was achieved in an applied magnetic field of 2.3 T, enhancing the optical power to 16 nW.

The ultimate goal is to have a miniature single frequency optical source that operates at room temperature. "Just now we are trying to produce better active regions," said Faist. "We also want to combine this resonator with detectors and modulators."