Could a bulk silicon approach developed at Cornell provide the long awaited answer of how to integrate optics and electronics? 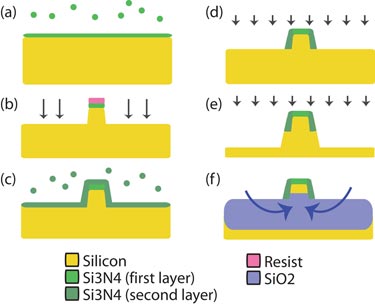 Researchers at Cornell University, US, have published details of a bulk silicon alternative to the conventional silicon-on-insulator (SOI) platform. The team fabricated waveguides on bulk silicon using common CMOS processes and just one lithography step. The hope is that this technique could open new doors in the quest for monolithic integration of optics and electronics. (Optics Express 18 5785)

"There is no standard or even good way of putting optics and electronics together right now," researcher Nicolas Sherwood-Droz from Cornell's School of Electrical and Computer Engineering told optics.org. "We have developed a clever new avenue of research to help solve the integration problem in a simple, material and process-compatible way, which we hope might evolve into a practical solution over time."

Today, scientists are forced to use wafers known as silicon on insulators (SOIs). These consist of a layer of crystalline silicon bonded to a layer of SiO2 (that acts as an optical buffer) on top of bulk silicon. 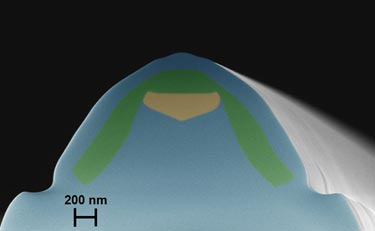 Optics are made on the first layer of silicon and are separated from the bulk by the oxide. This specialized wafer is unlikely to be combined with regular electronics given the large buffer between the main layer and the substrate. SOI wafers have at most a few hundred nanometres of buffer, where even the most confined optics require more than a micrometer.

"Our approach is different from what has been tried in that we still use single crystalline silicon for our waveguides and bulk silicon as the medium, exactly the same as is used for electronics," said Sherwood-Droz. "This gives us good optical quality (low loss) as well as the ability to modulate light using thermal or electro-optic methods. Silicon's high refractive index means that our optical devices can be small in geometry as well as in bending radii because of the high optical confinement."

To fabricate their waveguides, the Cornell researchers start with a bulk silicon wafer, deposit a thin layer of silicon nitride and then define the waveguide pattern using lithography. Everything is covered in silicon nitride once again and etched in an isotropic plasma etcher, which selectively removes nitride from horizontal surfaces.

"Remaining are the waveguide-like structures encased in silicon nitride," explained Sherwood-Droz. "Oxidizing this wafer creates glass around and underneath the protected structures. Eventually the waveguides are shaped and a buried layer of silicon dioxide is created, leaving the crystalline silicon waveguides isolated from the bulk."

The team has been able to fabricate waveguides with lengths from 0.5 to 2.2 cm and losses of 2.92 dB/cm. "Typical silicon waveguides (when fabricated on the thick BOX SOI wafers, which are order of magnitude more expensive and incompatible with CMOS) are in the range of 2–3 dB/cm," commented Sherwood-Droz. "Work is now ongoing to optimize the process and create waveguides in selected regions, with the aim of allowing electronics to reside nearby."