Consumer electronics giant Sony has developed an RGB laser light source, which it says is suitable for large screen projectors such as those used in digital cinema. Sony now plans to transfer the technology related to this module to its subsidiary Sony Manufacturing Systems and commence sample shipments in the second half of 2010. 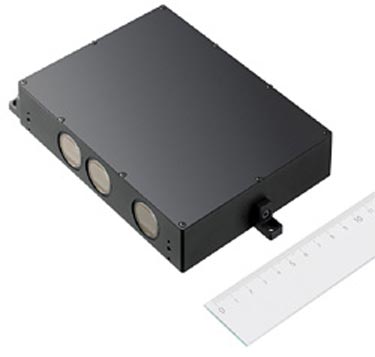 The module measures just 152 × 114 × 30.5 mm and contains red, green and blue lasers that offer a combined output power of 21 W. The company uses semiconductor laser diodes to provide the red and blue light at 642 and 464 nm, respectively, while the green emission comes via a compact solid-state laser frequency doubled to emit at 532 nm. Both the red and green lasers were developed internally by Sony.

The company quotes output powers of 10 W for the red source, 6 W for the green and 5 W for the blue and an overall lifetime of 10,000 hours. It adds that energy conversion ratios for the lasers range from 15 to 22% (see table below for more details). For the red and blue semiconductor lasers, these ratios are achieved through the use of a high-quality laser crystal and thermally efficient laser chip mounting technology. The green laser uses a proprietary laser structure which is said to enhance wavelength conversion efficiency. As a result, Sony claims that a low power consumption of 110 W at 5000 lumen output has been achieved.

Sony anticipates that the module will be used as the light source for a range of projectors, from 1000 lumen home theatre projectors to 10,000 lumen large screen projectors and digital cinema projectors. This is due to the scalability of the module design, which outputs collimated light beams for each of the three colours, enabling multiple modules to be stacked.

According to Sony, the module is an ideal replacement for the xenon lamps which are currently used in projectors thanks to its long lifetime, which could be up to 20 times longer than a xenon lamp. This reduces the need to replace lamps as well as maintenance costs.