Silicon photodiodes blend into the UV 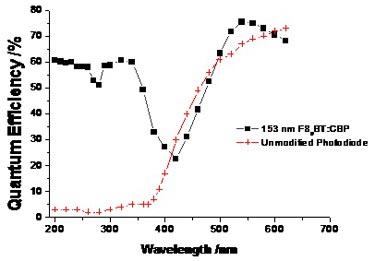 Hybrid semiconductor-silicon photodiodes capable of detecting light right down to 200 nm have been unveiled by researchers at the University of St Andrews, UK. The team is now trying to demonstrate the concept on an array detector such as a CCD, which would open the door to many imaging applications (Optics Express 18 3219).

Existing ways to deposit such enhancement layers include evaporation although this approach is both slow and expensive. "We have shown that solution-processed organic semiconductors can make a convenient and efficient enhancement layer that can be deposited by the simple process of spin-coating," explained group leader Ifor Samuel.

A typical conjugated polymer (or dye) absorbs light and re-emits it as fluorescence at a wavelength that is around 50–100 nm longer than the light absorbed. While that could be enough to convert UV to blue emission, silicon's response is still poor in the blue part of the spectrum.

According to Samuel, the key step was to obtain a much larger wavelength difference between absorption and emission.

"We achieved this using a copolymer consisting of units that absorb in the UV and units that emit in the green (where silicon photodiodes have excellent efficiency)," he explained. "A further refinement was to blend with an organic semiconductor called CBP to fill a gap in the UV absorption of the copolymer."

The approach of making hybrid devices, taking advantage of the best aspects of organic and inorganic materials, also has considerable potential in lasers and solar cells.

"Solution-processed organic semiconductors offer a wide choice of materials, blend ratios can be altered easily, and layer thicknesses can be chosen by varying spin speed, solvent and solution concentration," conclude Samuel and Levell. "This means that absorption, thin-film optical properties and emission wavelengths can easily be tuned to achieve an optimized photoresponse for the desired wavelength range."