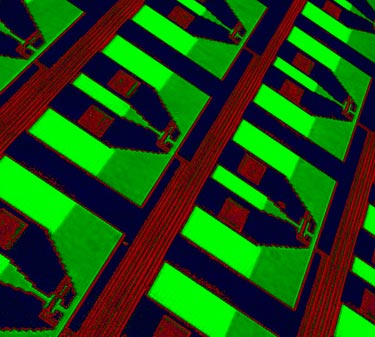 Scientists at IBM have used nano-engineering techniques to make the world's fastest "avalanche photodetector". Such devices are used in telecommunications networks and the work is an important advance in the field of optical communications. The photodetector is made using germanium, which is compatible with silicon-chip-making technology and could therefore find use in next-generation high-performance computer systems.

Computer processors communicate with each other over millions of tiny copper wires. Scientists would ideally like to use pulses of light instead of electrical signals because enormous amounts of information could then be sent between processors using much less power. Such architecture relies on the rapid conversion of optical pulses to electrical signals and back again – but current technologies for doing this tend to be slow, noisy and incompatible with silicon processing.

Turn down the noise

One promising solution is the avalanche photodetector, which converts relatively weak optical signals into robust electrical pulses. In such a device, an incoming light pulse strikes a semiconductor, freeing a few charge carriers. These carriers are accelerated by an electric field and in turn impact-ionize (or free) other charge carriers, and so on. This creates an avalanche of carriers that is then extracted as the amplified signal. However, this process occurs over a finite distance and time and is therefore subject to random fluctuations in numbers of carriers produced. This phenomenon is known as amplification noise and it degrades the performance of the photodetector.

Although it suffers from amplification noise, germanium is widely used in photodetectors because (unlike silicon) it can detect light in the infrared part of the electromagnetic spectrum – an important frequency range for optical communications. Now, Solomon Assefa and colleagues at T J Watson Research Center in New York have come up with a new way of removing noise from germanium-based photodectectors.

The new design relies on the team's ability to control the electrical and optical fields in their devices over very short distances. This is done by equipping the device with silicon and germanium waveguides that concentrate incoming light at the germanium detector. The germanium itself is only 30 nm thick, which means that it can support very high electric fields when biased by only a volt or two. The result is an avalanche that occurs much faster and over shorter distances than conventional devices – leading to a 50–70% reduction in noise caused by random fluctuations.

The device is the fastest of its kind, converting optical signals at 40 Gbps (40 billion bits per second) – about four times faster than the best conventional detectors. What is more, its small size means that it operates with just a 1.5 V power supply, compared with the 25 V of previous devices.

"This invention brings the vision of on-chip optical interconnections much closer to reality," comments T C Chen, vice-president of science and technology at IBM Research. "With optical communication embedded into the processor chips, the prospect of building power-efficient computer systems with performance at the exaflop (1018 flops) level might not be a very distant future."

The IBM team would now like to reduce the "dark current", or unwanted leakage current, in its device and increase "responsivity" (efficiency in generating charge carriers when photons hit the photodetector). "We also hope to obtain further signal amplification while maintaining the ultralow power and ultrafast performance," added Assefa. "Although there are many technical challenges in making these improvements, none are fundamental barriers."

"We are now working on integrating all of our devices onto a microprocessor alongside transistors," revealed Assefa.