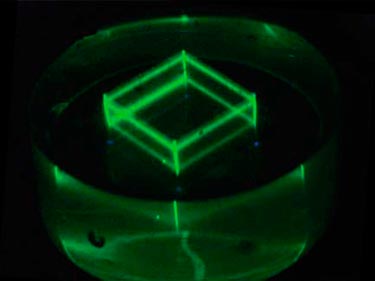 In a step towards futuristic 3D-display screens, researchers in Singapore have found a simple way to control the growth of tiny crystals that have useful optical properties. By careful doping with lanthanide elements, the researchers found that they could adjust the crystal structure, size and emission spectra of sodium yttrium flouride (NaYF4).

Known as "upconversion nanocrystals", NaYF4 crystals could play a critical role in the development of 3D-display technology, as they absorb near-infrared light and emit visible light. One promising application is dispersing them in transparent silicone displays, where infrared lasers can be used to generate images in 3D by scanning the silicone with invisible light causing the appropriate nanocrystals to emit visible light.

In addition, because NaYF4 is nontoxic and biocompatible, there is great potential for advanced bioimaging or luminescent biological labelling. Using near-infrared radiation for these applications is safer and more accurate than using ultraviolet light.

But to be effective at upconversion, the crystals need to be less than 20 nm in size and have a hexagonal crystal structure. Achieving this has proven challenging, because small NaYF4 crystals naturally favour the cubic crystal structure. Conversion to the hexagonal form typically requires harsh chemical reagents or prolonged heat treatments – conditions that can lead to other problems, such as the crystals sticking together or changing in size.

Now, Xiaogang Liu and colleagues at the National University of Singapore have found a much simpler way to control the growth of these crystals: by introducing carefully controlled quantities of lanthanide ions into the structure. Adding small amounts of heavy elements in this way is usually referred to as "doping" and is commonly used to make hybrid materials with unusual or desirable properties.

"We have discovered a new nanocrystal growth phenomenon induced by lanthanide doping," Liu told our sister website physicsworld.com. 'This allows us to control which phase the crystals grow in, but also adjust other properties. We can control the size of the nanocrystals – from several hundred nanometres to ten nanometres – but also fine tune the colour of their emissions from green to white and blue.'

The team then explored other lanthanides, identifying that samarium and neodymium doping produced smaller crystals, while erbium, ytterbium and thulium doping changed the colour of the visible light that was emitted. Liu hopes that, with further research, optimized combinations can be found that will lead to other nanocrystals with different desirable properties.

This research is very interesting and can potentially open up new ideas in controlling nanomaterial growth Song Jin, University of Wisconsin

"This is a new concept in materials science, and a fundamental discovery rather than simply a synthesis technology – although it is a more efficient way to make small nanocrystals than conventional methods," Liu says. "We will continue to explore the technological applications of these nanocrystals in photodynamic therapy, bioimaging, and animated 3D colour displays."

Song Jin, a nanocrystals expert at the University of Wisconsin in Madison first heard about the work during a visit to Singapore in January. "This research is very interesting and can potentially open up new ideas in controlling nanomaterial growth. What intrigues me personally the most is that how the addition of dopants changes so much of the crystalline phase and morphology of the nanostructures."