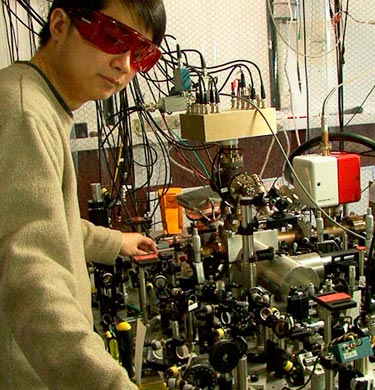 A new optical clock that is twice as accurate as any other has been unveiled by physicists in the US. The clock, which is based on a single aluminium ion, could remain accurate to within one second over 3.7 billion years. The previous record was held by a clock with one mercury ion, which was good to one second in 1.7 billion years.

The new optical clock also differs from most other designs in that it uses a quantum-information protocol. It could therefore be used to further boost the performance of such clocks and ultimately lead to them replacing atomic clocks as our official timekeepers.

Since the first atomic clock was unveiled in 1955, the technology has been used in national time standards around the world. Tiny atomic clocks, which use microwaves to probe atomic transitions, are also used as timepieces on Global Positioning System (GPS) satellites. The best atomic clocks have an accuracy of about 5 × 10–15, but this has been surpassed recently by optical clocks, which use light rather than microwaves and can be more than 100 times as accurate.

Stability is a must

An optical clock has three main components. The first is a highly stable "reference" frequency provided by a narrow optical absorption line in an atom or ion. The second element is a feedback system that "locks" the output of a laser (called the local oscillator) to the reference frequency. The third component provides a very precise measurement of the frequency of the laser – usually with a "femtosecond comb".

The most important component, however, is the atom or ion itself – which must absorb light over an extremely narrow and extremely stable frequency range. To ensure this, the atom or ion is isolated in a vacuum chamber and cooled to near absolute zero using laser beams – whereby light is absorbed and reemitted by the ion in such a way as to reduce its kinetic energy.

Aluminium ions are relatively easy to isolate from their surroundings – particularly from the effects of black-body radiation from the surrounding chamber. Unfortunately, aluminium ions are very hard to cool with laser light because they re-emit the absorbed radiation at a much lower frequency. This also makes it tricky to design a feedback mechanism to keep the laser locked on to the reference frequency.

James Chin-wen Chou, David Wineland and colleagues at the National Institute of Standards and Technology (NIST) in Colorado have got around this problem by pairing the aluminium with a second ion of magnesium, which is easy to cool. The team begins by trapping the magnesium ion using electric fields and then cooling it using a laser. They then introduce the aluminium ion into the chamber, which interacts with the magnesium via electrical forces. These interactions allow the team to chill the aluminium ion using "sympathetic cooling".

The local-oscillator laser is then fired at the aluminium ion and the efficiency at which the ion absorbs the light is determined by a technique called quantum logic spectroscopy (QLS). QLS is possible because the ions are just a few microns apart and therefore they behave as a quantum system – the result being that the absorption efficiency of the aluminium ion can be determined from light emitted from the magnesium ion. The greater the absorption efficiency, the closer the match between the aluminium ion's reference frequency and the local-oscillator laser – and this is used in a feedback loop to tune the laser to the ion.

The team first applied QLS to an optical clock in 2008, when it created a similar device using aluminium and beryllium (Al-Be) ions that had an uncertainty of about 2.3 × 10–17. By using magnesium and a new type of ion trap, the team has improved by this nearly a factor of three to 8.6 × 10–18. This shatters the previous record for precision – 1.9 × 10–17 – which was held by NIST's mercury ion clock.

The team was also able to compare the output of the new aluminium-magnesium clock with the older Al-Be clock to understand the differences between the two devices. Such comparisons are important if several optical clocks are deployed around the world – as is the case with standard atomic clocks.

Patrick Gill of the UK's National Physical Laboratory (NPL) is impressed by the new clock. "QLS is complicated, but the aluminium clock does it very well," he says. "It's a very good advertisement of the capability of the technique."

NISTS's Chou told physicsworld.com that the team hopes to reduce the frequency uncertainties in the device by developing new types of traps. The physicists are also working on new schemes to stabilize the frequency of the laser.

Despite their success, Chou believes that we are still a long way from adopting a specific optical clock as an international time standard. Indeed, other teams are looking at clocks based on ytterbium and indium ions.

"It is not quite clear which one will be most suitable as the next time standard", says Chou. "People all around the world would need to be able to construct such devices and agree on the frequencies," he adds. "Optical clocks are thus still in their early stage toward being standards."

The work is will be described in Physical Review Letters and a preprint is also available at .