Researchers in the US have succeeded in growing germanium nanoneedle arrays on flexible substrates for the first time. The arrays could be useful for making anti-reflective coatings as well as in high-performance photodetectors and photovoltaic devices. 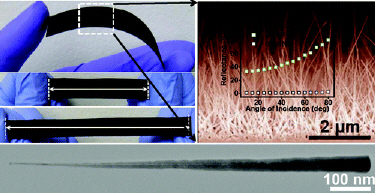 The germanium nanoneedles have ultrasharp tips that measure just 2 nm across and strongly absorb light. Light is hardly reflected at all from the nanostructures, even at high angles of incidence.

Ali Javey at the University of California at Berkeley and colleagues found that nickel nanoparticle catalysts can be used to grow highly dense germanium nanoneedle arrays with ultrasharp tips and wider bases in a chemical vapour deposition process. The needles can be grown on flexible substrates, such as plastic and rubber. Gold nanoparticle catalysts, on the other hand, produce larger-diameter germanium nanostructures with significantly inferior optical absorption properties. The optical properties of the nanoneedles can be easily controlled, something that is not readily possible with needles grown by other methods.

The germanium needles look black because they absorb practically all wavelengths of visible light in the optical spectrum.

The team, which includes researchers from the Lawrence Berkeley National Lab, also in California, says that the needles could be used as the absorber material in photodetectors and photovoltaics. "Impressively, just a 2 µm thick film of nanoneedles results in nearly 100% of light collection efficiency, even for high angles of incidence greater than 75°," Javey told our sister website nanotechweb.

The researchers are now looking at ways to integrate this novel absorber material in high-efficiency devices.