Nextreme coolers get closer to the source 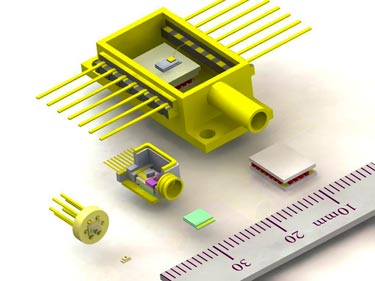 TECs are getting smaller

Nextreme Thermal Solutions (Durham, NC) has applied semiconductor production methods to the development of a volume manufacturing process for its microscale thermoelectric coolers (TECs). As well as reducing the size of the TECs, the company claims that its new approach also helps the devices to pump more heat.

The technique involves integrating the TE material, in this case thin-film bismuth telluride (Bi2Te3), into a conventional solder bump, allowing those bumps to actively contribute to the heat transfer ability of the TEC. Nextreme calls these specialized structural features "thermal bumps".

"Integrating the thermoelectric into something that can be mass-produced using a semiconductor manufacturing process gives us a genuine mass-market process," Paul Magill of Nextreme told optics.org. "The process is fully automated and based on back-end silicon processing. The only non-standard process involved is the formation of the proprietary TE material itself."

Nextreme's OptoCooler HV14 cooler measures 1.5 × 1.8 × 0.57 mm thick. "In fact, the active layer of TE material in the HV14 is only about 15 µm thick," said Magill. "The ceramic material serving as an interface for the transfer of heat accounts for another 250 µm or so above and below. The remainder is just the thickness of the solder attached to the TE material and the package header."

This thinness automatically boosts the TEC's pumping capacity – the OptoCooler HV14 can pump 1.5 W of heat at 85 °C. According to Magill, it is the only cooling solution able to fit inside a modern 6-pin TO56 package.

"Reducing size as a means to cut costs has been a driver in optoelectronics for a long time, but thin-film TECs are really the first breakthrough in active cooling that can keep in step with the drive for miniaturization that is going on across the rest of the industry. As far as we know, no other coolers can pump more heat per unit area than Nextreme coolers."

Nextreme is betting that thermal bumps could play a big role in laser-diode applications. Some diodes are packaged in surface-mount or "flip chip" format, in which case the solder bumps themselves would help to alleviate the significant thermal challenges that the flip-chip approach poses. On a larger chip, where hot spots are present, the thermal bumps could be clustered in a particular area to provide cooling.

A crucial parameter for any TEC is its pumping capacity. In theory, the thermal bumps themselves are capable of pumping an impressive 300–600 W/cm2, although practical limitations prevent anything close to this value from being achieved in a real-world TEC.

"The bumps cannot touch each other, so there is always non-heat-pumping space inbetween them, which reduces the performance," said Magill. "The packing fraction in our devices is typically 20–25%. We have pushed this as high as 35%, which raised the pumping capacity up to 150 W/cm2."

A further limitation is the need to have both N-type and P-type bumps present in the structure to ensure that, while the current through the cooler flows in a loop, the heat flows in only one direction. This results in a degree of asymmetry in the pumping, because it so happens that P-type tends to perform a little better.

"Designers of cooling solutions have had to become inventive as the size of diode packages has shrunk," Magill commented. "Ideally, you would choose to cool the diode from inside the package and just pump the heat out through the package wall, but that can be difficult when space is limited. You would also like to have the TEC directly underneath the laser diode and pump heat out through some conductive medium in the header section of the TO package, but not all TO-style packages are built to transfer heat through the structure. These are the kind of challenges we have had to tackle."