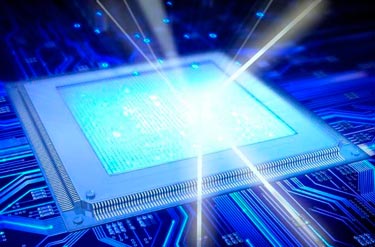 Germanium sees the light – is silicon next?

The first infrared-emitting germanium laser has been created by researchers in the US. The development could be an important step towards creating optical components such as lasers from silicon – which like germanium is an indirect-gap semiconductor – rather than direct-gap materials such as indium phosphide. The breakthrough could lead to cheaper and more efficient optical communications systems and even optical computers.

One way of making computers run faster is to use light to transfer data rather than electrical currents. The simplest way to do this would be to make the lasers from silicon, because they could then be integrated directly with other chips. However, today's commercial diode lasers use comparatively expensive direct-gap semiconductors, which cannot be easily integrated with conventional silicon chips.

Semiconductors emit light when electrons transfer from a higher energy conduction band to recombine with holes in the lower energy valence band. The energy of electrons within these bands also varies according to a property known as crystal momentum. For each band within a material, electrons adopt the lowest energy crystal momentum – and the recombination of electrons and holes with different momentum is forbidden by quantum mechanics.

In direct-gap semiconductors the crystal momentum of electrons in the valence and conduction bands match. By contrast, electrons in the conduction band of indirect-gap semiconductors such as silicon and germanium usually have a different crystal momentum to those in their valence band. This means a quantized lattice vibration – or phonon – must combine simultaneously with the electron and hole to allow light to be emitted. "The probability of that happening is low," explained Jurgen Michel of the Massachusetts Institute of Technology (MIT), who was involved in the research. "All the other recombination processes that don't emit light will win out because they're much faster," he added.

Now, Michel and colleagues at MIT have shown that lasers can be made that exploit direct-gap transitions in germanium. Michel's team produced their germanium device on a silicon wafer. The silicon and germanium have different thermal properties, so heating them during fabrication created strain in the germanium that changed its band structure. They also doped the laser with phosphorus impurities, which added enough electrons to ensure that some possessed the correct crystal momentum to make a direct transition. "The energy difference between indirect and direct bandgap in germanium is just small enough that you can overcome it with doping and strain," Michel said.

The MIT team stimulated light emission in this device at room temperature with a separate pulsed 1064 nm pump laser. When the pumping power was raised above 6 µJ per pulse, the device began lasing, emitting light at different wavelengths around 1600 nm, a wavelength that can be used for optical communications.

Although silicon Raman lasers have been made, these can only emit light when optically pumped with another laser, making them unsuitable for chip-to-chip data transfer. Leading semiconductor firm Intel has also produced hybrid silicon lasers that use direct-gap indium phosphide to produce the light, and silicon to create the laser cavity around it. Such devices currently have the upper hand over the MIT germanium-silicon device as they emit light when electric currents are applied to them. However, Michel says that his team has already developed a design for its own more readily fabricated electrically pumped laser, which is soon to be published.

Douglas Paul of the University of Glasgow, who is developing terahertz frequency silicon-germanium quantum cascade lasers, says that the Michel's paper "is a significant step forward towards a useful electrically pumped laser on silicon". He points out that the amount of energy needed to make the device emit laser light is currently high, but that this is expected for a first design and should decrease.

This work will be published in Optics Letters.