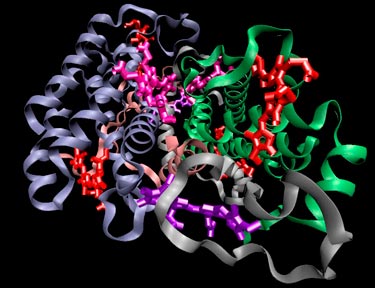 Physicists in Canada and Australia have shown that nature exploits quantum mechanics to make photosynthesis more efficient. By probing light-harvesting proteins within algae using laser beams, the researchers found that quantum coherence links molecules within these proteins. They say that these links improve the transfer of energy in the production of life-supporting sugars.

Photosynthesis involves using sunlight to convert carbon dioxide into chemical energy containing sugars. However, the protein complexes that carry out the necessary reactions do not absorb sunlight themselves. Instead, they rely on electrons being excited within pigment molecules housed in other proteins, with typically hundreds of pigment molecules supplying energy to an individual reaction centre. One reason for supplying energy indirectly in this way is that some photosynthetic reactions need the energy from several electron excitations in quick succession, something that would otherwise not be possible if light levels were low.

The transfer of energy from light-harvesting proteins to reaction centres is a highly efficient process. Scientists already know, for example, that the various pigments inside each protein are just the right distance from one another – close enough to enable fast energy transfer, but not so close that the molecular orbitals of the pigments overlap and quench their excited states. It is also known that the arrangement of the proteins allows the energy to be sent via many different routes.

Now, however, Elisabetta Collini of the University of Toronto and colleagues are proposing that the energy-transfer process is made even more efficient via quantum coherence. They suggest that the pigment molecules do not act entirely on their own, but interact so that when one molecule is excited by a photon from the Sun, it can to some extent share that excitation quantum mechanically with other pigment molecules. This superposition of excited states will then oscillate, shifting the excitations from one set of molecules to another and then back again on a very short timescale, allowing energy to be transferred to the reaction centres before it is released as light or heat.

Collini's team studied this phenomenon in two kinds of light-harvesting protein found in cryptophyte algae, taking advantage of the fact that the main pigment in these proteins, known as bilin, can be tuned to absorb light across a wide range of frequencies. The researchers first exposed the proteins to a pair of short-duration laser pulses, exciting the constituent pigment molecules, before stimulating emission from these excited states by sending in a third pulse shortly afterwards.

What the team was looking for were emission frequencies that did not match the excitation frequency, because these would indicate the existence of a superposition of different states. This they did by detecting the quantum-mechanical equivalent of beats, the cyclical peak in volume produced when two sound waves of different frequency interfere with one another. The fact that they did indeed detect such beats is evidence, they say, that the algae takes advantage of quantum coherence.

The researchers also found that the oscillations of this coherent superposition lasted for over 400 femtoseconds (4 × 10–13 s), which was much longer than expected. They had thought the oscillations would last for no more than 100 fs, because this was the timescale over which they thought interference from the surrounding protein and water molecules would swamp or "decohere" the delicate quantum superposition state. "[We] never anticipated such remarkable effects," says Collini's colleague, Gregory Scholes of the University of Toronto, also because bilin molecules interact more weakly with one another than do other photosynthetic pigments.

Such oscillating coherence has been observed before when Graham Fleming of the University of Berkeley, California, and colleagues studied the light-harvesting proteins of green sulphur bacteria in 2007. That experiment, however, was carried out at a mere 77 Kelvin, significantly reducing environmental interference and therefore minimizing the problem of decoherence. The latest work, in contrast, was carried out at room temperature, suggesting that quantum coherence really does play a role in photosynthesis.

Indeed, Paul Davies, director of the BEYOND Center for Fundamental Concepts in Science at Arizona State University in the US, believes that quantum mechanics might be deployed more widely in the natural world. "My feeling is that nature has had billions of years to evolve to the 'quantum edge' and will exploit quantum efficiencies where they exist, even if the payoff is relatively small," he says. "I suspect that many biological nanostructures can be understood fully only by reference to quantum coherence, tunnelling, entanglement and other non-trivial processes. The challenge is to identify such quantum goings-on amid the complex and noisy environment of the cell."