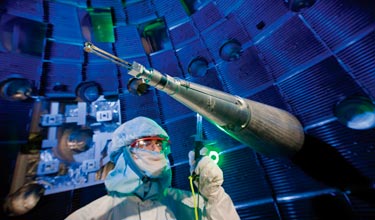 Researchers in the US say they have made a crucial breakthrough towards achieving laser fusion and that they expect to generate the conditions for a sustained nuclear reaction by the end of the year. These claims are backed up by the publication of the first science results from the National Ignition Facility (NIF) and among the highlights was a new world record for laser intensity.

Four times over budget and five years behind schedule, the NIF project has been under pressure to deliver since it finally began its operations last March at the Lawrence Livermore National Laboratory (LLNL) in California. NIF's main goal is to focus a number of lasers capable of generating 180 MJ of energy – more than 60 times more energetic than any machine in existence – onto a hollow sphere 2 mm in diameter made of beryllium.

By dumping all of this energy into a tiny volume, the aim is to try to squeeze together isotopes of deuterium and tritium contained inside the sphere. This could then spark "ignition", which is the point at which the deuterium and tritium undergo sustained nuclear fusion that produces excess energy.

With these first results, the NIF scientists have been working to configure conditions within the target spheres, known as "hohlraums". They zap these tiny targets with 192 lasers fired in synchrony to deposit 680 kJ of energy in the space of 10 billionths of a second – more than 20 times more power than any previous laser experiment.

NIF scientists are relieved by these results because there had been a fear that conditions required for fusion within the hohlraums could be fatally disturbed by the laser pulses, which could trigger damaging plasmas. Fortunately, this effect did not prevent the researchers from emulating fusion conditions – compressing 1.8 mm capsules and forcing radiation temperatures of 3.3 million K.

"We show that we can heat hohlraums to temperature and radiation symmetry close to what is needed for ignition," says Siegfried Glenzer, an LLNL researcher who was involved in this research. "When we extrapolate the results of the initial experiments to higher-energy shots on full-sized hohlraums, we feel we will be able to create the necessary hohlraum conditions to drive an implosion to ignition later this year."

Chris Edwards, a researcher at the Central Laser Facility in the UK describes these results as "a very exciting development" and sees no reason to doubt this claim that NIF will achieve ignition within a year. "I am holding my breath and very excited about the opportunities this could open up for energy applications and astrophysical research," he says.

The NIF project is a national collaboration between the US government, industry and academia with the aim of protecting national and global security. One application in the shorter term will be to use the facility to validate computer simulations of nuclear weapons to ensure that the US's nuclear stockpile is safe. In the longer term it is hoped that NIF could lead the way towards practical fusion energy.

This research is published in Science.