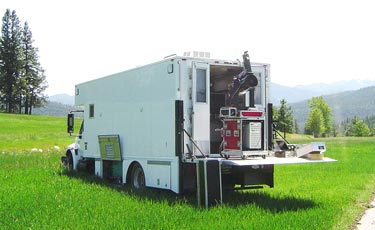 Eye on the sky

The frequency, duration and severity of wild land fires in the western US has increased over the last few decades and the pollutants carried in the resulting smoke plumes are found to be detrimental to both human health and the environment. Now, researchers at the US Forest Service are hoping to shed light on the trajectories, rise and dispersion of these pollutants by probing smoke plumes in the vicinity of wildfires (Appl. Opt. 48 5287).

Lidar is perhaps the ideal tool for the continuous monitoring of smoke-polluted atmospheres thanks to its ability to provide 3D range-resolved information about aerosol particles and plume heights as well as the direction and rate of smoke-plume movement.

"Lidar can operate from a position far outside the burning area, so the technique offers complete safety for the personnel involved," Vladimir Kovalev, a research physical scientist at the US Forest Service, told optics.org. "Our approach is simple, robust and, unlike other techniques, can be performed in real-time."

By collecting the elastic backscatter from 1064 nm pulses, the scientists are able to determine the atmospheric heterogeneity height indicator (HHI), a value that enables all heights at which smoke-plume heterogeneity is detected to be mapped out. Furthermore, analysis of a time series of HHI plots enables the team to track the behaviour of smoke layers, following their evolution and eventual break-up.

While the Forest Service is currently using its technique to monitor forest fires, the scientists believe that the same method may be useful for investigations of atmospheric processes and other tasks in meteorology.