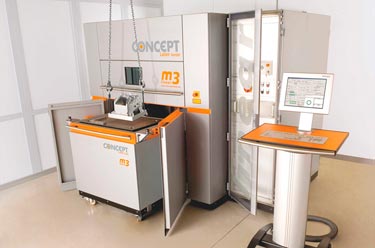 Traditional laser sintering has proved its worth in the automotive industry, where the use of a high-power laser to fuse particles of metal, plastic or ceramic powder into a prototype of a desired item can dramatically shorten development cycles and reduce costs. But as the complexity of component designs has increased, so laser-based prototyping processes have had to keep up.

One such advance is LaserCUSING, from Concept Laser of Lichtenfels, Germany. "LaserCUSING is based on the fusing of pure, single-component metallic powders with a laser," explained Colin Cater, rapid manufacturing product manager at ES Technology, an Oxfordshire-based firm that supplies and supports the LaserCUSING system in the UK.

As a result, while conventional laser-sintered products are mainly used for rapid prototyping, LaserCUSING can produce items approaching 100% full density, able in some cases to be used as finished industrial components as well.

"The process now has to work successfully with a range of new materials, driven by customer demand," noted Cater. "Medical applications require a range of titanium alloys and cobalts, while aerospace components could involve superalloys like Hastelloy X and Inconels."

To deal with these materials, Concept Laser now employs a 200 W CW fibre laser, able to focus on a spot size of 70–200 µm. "This beam is directed in a specific 'checkerboard' pattern, to melt the fine layers of powder," said Cater.

Concept Laser's M3 Linear system controls the laser via a series of linear drives and mirrors, rather than a fixed optical lens, to ensure the beam cross-section does not become elliptical.

Monitoring the sintering operation while it is under way is another challenge. Traditional methods have included measuring the levels of oxygen released in the process, but Concept Laser has now unveiled a more precise, vision-based system.

Technical details are being kept confidential, but the company's Direct Cusing Control system is claimed to offer continuous monitoring of the laser fusing process with maximum temporal and spatial resolution.

"Customers have been looking for this feature for a number of years, to avoid having to do sacrificial tests on parts," noted Cater. "Cameras and vision systems have only recently become capable of recording high-quality images of the Cusing process that could be used in a meaningful way."

Now that imaging systems can capture the operation clearly, they could soon provide a route to regulating the fusing process itself in real time, through direct control of the laser.