Tapping into the ocean colour scene 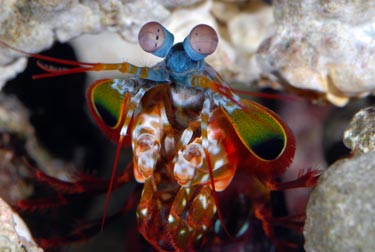 Here's looking at you

With arguably the most complex eyes in the animal kingdom, the mantis shrimp can convert circularly polarized light into linearly polarized light almost perfectly across the whole visible spectrum. This remarkable ability is leading an international team of researchers to take another look at some of today's man-made polarization optics (Nature Photonics DOI:10.1038/NPHOTON.2009.189).

"We have pinpointed a particular photoreceptor cell in the eye of the Mantis Shrimp that manipulates the polarization of light irrespective of wavelength," Nicholas Roberts, a biologist at the University of Bristol, UK, told optics.org. "If you can chemically engineer the correct optical properties to mimic this cell, then there is no reason why the same optical principles won't apply."

Polarizing wave plates or wave retarders are important optical components used in many common data storage systems such as CDs, DVDs and data projectors. The problem is that designing wave plates to work for many different colours of light rather than for a single colour is exceptionally difficult.

While scientists have managed to fabricate quarter wave plates that contain sub-wavelength gratings to achieve a level of achromaticity, it's still the case that most are monochromatic. The wave plate in the mantis shrimp's eye remains unique in its ability to outperform all manmade systems by operating across the entire visible spectrum.

"In our device, the difference between the refractive indices increases as you go from blue to red," explained Roberts. "This means that for all wavelengths the retardation is always one quarter of a wavelength and we have an achromatic device."

The researchers hope that optical designers will now be able to copy the design to create manmade wave plates with much better performance than is currently available.