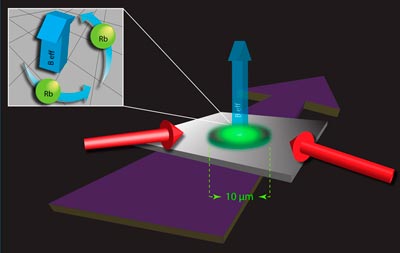 Simulating a magnetic field in a BEC

Physicists in the US have become the first to use laser light to make neutral, ultracold atoms behave like charged particles in a magnetic field – even though the atoms have no charge. The set-up could be used as a "quantum simulator" to gain a better understanding of how electrons in solid materials respond to magnetic fields. In particular, it could shed further light on the fractional quantum Hall effect (FQHE), which could someday be exploited in quantum computers.

Neutral atoms of integer spin are now widely used to simulate the quantum behaviour of condensed-matter systems, such as superconductivity, by cooling them to such low temperatures that they form a Bose–Einstein condensate (BEC), in which the atoms settle in the same quantum state and move coherently as though they are a single entity. The interactions between the atoms can then be adjusted by external magnetic fields, thereby allowing physicists to "dial up" interactions that mimic those between electrons in a solid.

But because the atoms in a BEC are neutral, it has been hard to simulate the effects of a magnetic field on electrons and other charged particles, which is critical for understanding superconductivity and other effects related to the charge and spin of the electron. Physicists had got around this problem by physically rotating a BEC, because the coriolis force has a similar effect to a magnetic field. Researchers have had some success in creating vortices in rotating BECs – vortices that are similar to those that occur when certain superconductors are exposed to a magnetic field.

However, these experiments are fiendishly difficult, particularly at the large angular velocities needed to simulate magnetic fields strong enough to bring out the FQHE. The new research, carried out by Yu-Ju Lin and colleagues at the Joint Quantum Institute of NIST and the University of Maryland in the US and the National Polytechnic Institute of Mexico, allows a mangetic field to be simulated in a BEC, without rotating the condensate itself.

The experiment involved first forming a BEC of about 250,000 rubidium-87 atoms held at about 100 nK in an optical trap before firing perpendicular laser beams at the atoms. An atom can absorb a photon from one of the beams, and then be stimulated by the second beam to emit a photon in a specific direction. The net effect is a change in the canonical momentum of the atom.

Vortices in a BEC

A magnetic-field gradient was then applied across the BEC, which changes the energy levels of the atoms – and therefore the momentum transfer process. The result is that the momentum change acts in one direction on one side of the BEC and in the opposite direction on the other. This can be described mathematically as a vector potential, the "curl" of which is identical to a magnetic field.

Lin and colleagues confirmed the simulation of a magnetic field by looking for a matrix of vortices in the BEC. Because the vortices are tiny – just nanometres in size – they cannot be spotted using light. So the team switched off the optical trap, causing the BEC to expand and magnifying the vortices until they were large enough to see using visible light. As there are no atoms at its centre, the vortex appears as a black dot against the lighter background of the atomic gas.

"The vortices are proof that we have simulated a magnetic field," Lin told physicsworld.com. Furthermore, the vortices appeared to be arranged in a regular lattice – something that is also predicted by theory.

More work to be done

Martin Zwierlein of the MIT-Harvard Center for Ultracold Atoms, who was not involved with the research, agrees with Lin and colleagues that more work needs to be done before the system can be used to study quantum effects like the FQHE, which is of particular interest because it could some day be exploited in quantum computers.

To observe this effect a very thin sheet containing a small number of strongly interacting electrons is cooled to very low temperature and a strong magnetic field is applied. At certain field strengths, the electrons condense into a liquid-like collective state containing quasiparticles, each of which carries a fraction of electrical charge and a quantized amount of magnetic flux. Some physicists believe that these quasiparticles could be used to store and process information in a topological quantum computer.

One challenge will be to boost the strength of the simulated magnetic field. According to Lin, the simulated field is not significantly stronger than fields created by rotating a BEC. In addition, an optical lattice must be created to divide the BEC into very thin slices, each containing a small number of atoms.

The research is reported in Nature.