Researchers have made single layers of graphene luminescent for the first time by simply exposing them to a plasma of oxygen. The resulting material could find applications in optoelectronics and light-emitting devices. 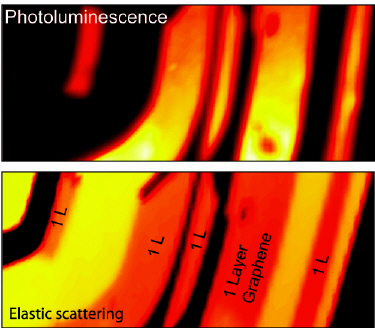 Electrons move through graphene – a 2D sheet of carbon just one atom thick – at extremely high speeds thanks to the fact that they behave like relativistic particles that have no rest mass. This means that graphene is often touted to be the post-silicon material of choice for future electronics devices. Its optical and mechanical properties are also ideal for a host of applications, including micro- and nanomechanical systems, thin-film transistors, transparent and conductive electrodes, and in photonics.

A team, led by Andrea Ferrari of Cambridge University in the UK, Achim Hartschuh at Ludwig-Maximilians University of Munich, Germany, and Andre Geim of Manchester University, UK, has now revealed another remarkable facet to graphene's character. The researchers have shown how totally dark single layers of pristine graphene can be made luminescent by simply exposing them to oxygen plasma.

The photoluminescence observed is uniform and extends across large areas in the layers. It is also possible to make thin hybrid structures by etching just the top layers in a sample using the plasma, while leaving underlying layers intact. "This combination of photoluminescent and conductive layers could be used in optoelectronics and sandwich light-emitting diodes," Ferrari told nanotechweb.org.

The oxygen plasma makes the graphene layers luminescent by breaking some of the carbon–carbon bonds in the material. But, it is not strong enough to significantly damage the sample, he adds.

This is the first time that researchers have succeeded in making individual, single layers of graphene controllably luminescent. Other groups previously managed to do this in bulk samples or in solutions of graphene oxide, but never in single layers before. Such exquisite control means that the material can now be used to make a wide range of optoelectronics devices.

Most previous work also focused on the electronic and mechanical properties of graphene. This new work looks at how the material might be employed as transparent and conductive electrodes, or as saturable absorbers in lasers. "We clearly show that graphene optoelectronics has great scope and this subject could become a major focus of future research," said Ferrari.

The team now hopes to better understand the mechanism behind luminescence in the "wonder material".

The work was published in ACS Nano.