Researchers in the UK and Italy have shown how light can make non-symmetric nanostructures, like carbon nanotube bundles and gold nanorods, rotate. The light-driven nanorotors could be used to make next-generation photonic force and torque microscopes as well as all-optical mechanical devices comprising nanoscale photonic circuits. 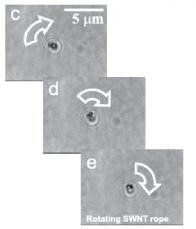 Although the force exerted by photons is far too weak to be felt in everyday life, it can be greatly increased by concentrating light in nanophotonic circuits. Scientists routinely use the force of light to move micron-sized objects in a technique called "optical tweezers", which work by trapping the objects near the focus of a laser beam. The technique allows objects, such as single atoms, biological cells and semiconductor components, to be picked up and moved around using just light.

Now, Andrea Ferrari of Cambridge University, Phil Jones of UCL and Onofrio Maragò at CNR Messina have shown how optically trapped non-symmetric structures, like CNT bundles and aggregates of gold nanorods self assembled in water, can be set to rotate using laser light. The researchers used a novel technique to accurately detect the rotational motion of the nanostructures in the optical trap. In this method laser light emerging from the optical tweezers is collected, and the light scattered by the trapped particle is then interfered with unscattered light onto a photodiode to measure the particle's position and orientation.

"The new methodology can be applied to any kind of nanomachine, where rotations can be detected with a very high resolution," Maragò told nanotechweb.org. "We can precisely determine both the trapped forces and rotational properties in our optically trapped system with the same set of data."

The study complements previous work by the same group that measured the light forces exerted on carbon nanotubes in optical tweezers.

Spurred on by the new result, the researchers now hope to make a next-generation photonic force microscope – a well calibrated optical trap based on nanotubes that could be used as a scanning probe technique to measure forces at the femtonewton (10–15 N) level. Current optical traps can only measure forces in the piconewton (10–12 N) range.

"In principle, we could also use our light-driven rotating CNT bundles to realize a nanotube-based photonic torque microscope with high resolution," said Maragó. Such an instrument would measure torques on molecules with high sensitivity.