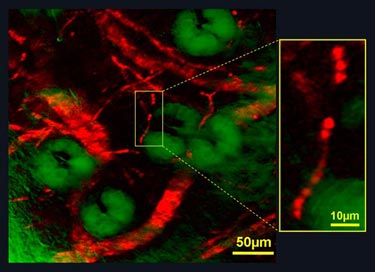 A new microscopy technique that turns molecules into "mini lasers" has been developed by researchers in the US. The new method could help scientists to study biological samples containing "dark molecules", which are invisible to today's advanced fluorescence microscopes.

Fluorescence microscopy is the technique of choice for obtaining high-resolution images of biological samples. It works by tagging molecules in the sample with fluorophores – molecules that emit light shortly after being illuminated with light of a shorter wavelength. However, some important biological molecules such as haemoglobin cannot be tagged in this way, rendering them invisible to such microcopes.

The new method is called stimulated emission microscopy and was developed at Harvard University by Wei Min, Sijia Lu, Sunney Xie and colleagues. It is a classic "pump-then-probe" measurement that involves firing two different laser pulses at the sample. Each pulse is about 200 femtoseconds long and the two are separated by less than a picosecond.

Energy from the first (pump) pulse is absorbed by a molecule of interest, placing it in an excited energy state. The energy of the photons in the second (probe) pulse is set at precisely the difference between the molecule's excited and ground states. This stimulates emission of photons from the excited molecules, which boosts the amplitude of the probe pulse by a factor of 1+10–4 to 1+10–8.

Mini lasers Xie told physicsworld.com that this is the same process involved in the production of laser light – in effect the molecules are acting as mini lasers.

To extract this tiny signal, which is much smaller than noise in the probe laser, the team switched the train of pump pulses on and off at about 5 MHz and used a lock-in amplifier to eliminate low-frequency noise. An image can be built up in a matter of minutes by scanning the pulses across the sample and repeating the measurement.

By adjusting the energies of the pump and probe lasers, the Harvard group were able to image a number of biological samples containing hitherto dark molecules. They could, for example, see individual red blood cells in a sample of mouse tissue as well as measure the distribution of a certain drug in a similar sample.

Watching quantum dots In addition to biological samples, Xie believes that the technique could prove useful for characterizing a wide range of organic and inorganic materials with so-called "dark states" – including quantum dots.

Xie said that he hopes to "test the interest of microscope manufacturers" with regards to the commercialization of the technique.

The research is reported in Nature and, in a commentary in the same issue of the journal, Stefan Hell and Eva Rittweger of the Max Planck Institute for Biophysical Chemistry in Heidelberg describe the work as "a bold step towards unveiling details of live cells and tissues that would otherwise be left uncharted".