Intel's Photonics Technology Laboratory in California is showing how optics may one day enable computer-chip designers to overcome the fundamental limitations of electronics. Breck Hitz talks to the lab's director, Mario Paniccia. 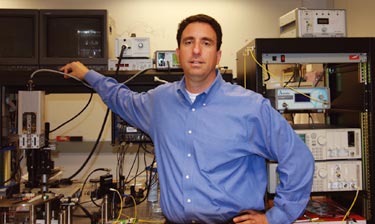 Mario Paniccia settles into his chair with an air of confidence that comes from having been right all along. "We have done all the things that sceptics said we could not," he says.

Paniccia, who is director of Intel's Photonics Technology Laboratory in Santa Clara, California, ticks off his group's accomplishments: silicon lasers; high-speed silicon modulators; fast, sensitive silicon photodetectors in the infrared. "We have got beyond the proof-of-principle stage," he says. "Now we're putting it all together so that Moore's law can extend for decades into the future."

Moore's law is the prediction made in 1965 by Intel's co-founder, Gordon Moore, that the number of transistors in an integrated circuit would double approximately every two years. That prediction has proven breathtakingly accurate during the past four decades. However, as circuits get smaller, scientists and engineers are beginning to see difficulties, such as heat dissipation and current leakage, which affect the ability of electronic circuits to carry information from one place to another fast enough to keep pace with Moore's law. Substituting photons for electrons is one promising way around these limitations.

But not everything is plain sailing. The electronics industry uses mainly silicon, which is not the material found in photonic devices. To combine photonics efficiently with electronics, photonics somehow has to be made to work with silicon. The problem is that silicon is a poor candidate for photonic applications because its electronic structure has an "indirect band gap", making it an extremely poor light emitter. This means that when an electron and hole combine in silicon, the resulting energy released is much more likely to be emitted as vibrational energy, or phonons, rather than as photons.

Less than a decade ago, Paniccia and his group set out to overcome such drawbacks. They identified a number of technologies that must first be developed and put together before so-called silicon photonics can become practical and take Moore's law beyond just the realm of electronics. Paniccia identified three main components that would make up a silicon photonic chip. First, a silicon-based laser would be needed to produce light at a determined wavelength. The light would then be encoded into a "0" or "1" with a silicon modulator and then, at the other end of the link, the state of the light would need to be read out with a silicon-based detector.

In the quest for a silicon laser, researchers have tried to overcome silicon's bandgap disadvantage by putting impurities such as neodymium into the silicon lattice that could function as a laser. Those attempts ultimately proved unsuccessful. But in 2004 Bahram Jalali and colleagues at the University of California, Los Angeles (UCLA), demonstrated the world's first successful silicon laser without the need for doping.

Jalali's device was a Raman laser, which has the advantage that it has nothing to do with a semiconductor's band-gap, but instead is based on phonon scattering in a material. An incoming light beam is scattered from the silicon lattice so that part of the photon's energy is absorbed by the lattice and the scattered photon is shifted down in frequency. If the effect is sufficiently intense, the emitted beam has all the characteristics – spatial and temporal coherence, and monochromaticity – of stimulated emission.

However, to avoid significant losses, the laser developed by Jalali had to operate in a relatively slow pulsed mode. To transmit data at the gigahertz rates desired, it is necessary to start with a CW laser and modulate the photons externally. A few months after Jalali created his laser, Paniccia's group announced the first CW Raman-based silicon laser. The problem was that this laser still needed another laser to provide the incoming photons.

In 2006, however, Paniccia's group announced that it had built a laser that required no optical input. This so-called hybrid silicon laser was built by fabricating an indium-phosphide junction directly on top of a silicon waveguide, so that photons generated in the junction were coupled into the waveguide. Gratings etched onto this waveguide then determined the precise wavelength emitted by the laser. "This was what everyone had been seeking," Paniccia says. "It was an electrically pumped laser that could be directly assembled into a silicon chip, and that could be produced cheaply in large quantities."

Silicon modulators pose another perplexing problem. For decades, the electro-optic effect – a change in a material's refractive index in response to an applied electric field – has been the keystone of optical- modulation techniques. Here, the applied field alters the material's birefringence so that it rotates the polarization of light passing through it, and a polarizer downstream converts the polarization rotation into amplitude modulation.

But silicon has virtually no electro-optic effect, so Paniccia's group had to devise another solution. The researchers got around this by fabricating a silicon junction across both arms of a "Mach–Zehnder" interferometer. When a voltage is applied to the junction, electrons and holes are created in the junction, which changes the silicon's refractive index. The intensity of the light transmitted through the interferometer is then modulated by changing the phase difference between the interferometer's two arms. In 2007 Paniccia's group achieved amplitude modulation at speeds of up to 40 Gbit/s – similar to those in non-silicon-based modulators. 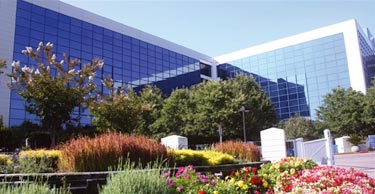 The final difficulty in creating an all- silicon photonic circuit is getting the silicon to act as a detector that can convert the optical signal into an electrical one. Paniccia and his group solved this problem by growing a thin layer of germanium onto the silicon so that when the photons travel down the silicon waveguide a part of the signal would "evanescently" couple into the germanium. This creates an electron–hole pair in the germanium and thus an electrical current.

Several months ago Paniccia's group made an even better detector, which produced a stronger electrical signal (Nature Photonics 3 59). This so-called silicon-based avalanche photo-detector uses photons to create electron–hole pairs in a thin germanium layer. The electrons then hit other electrons that are free in a silicon "amplification region", thus triggering a chain reaction that frees ever more electrons. Eventually, this process can increase the number of carriers by a factor of 10–100. "This increase in detector sensitivity translates to a reduced need for transmitter power, or greater transmission distances, or other significant system advantages," Paniccia says.

The final challenge is packaging all these components together into a photonic-based circuit. Today's photonic devices, such as CD players, DVDs and fibre-optic transmitters/receivers, must be manually assembled and aligned, which accounts for more than a third of the cost of photonic equipment. For photonic chips to be economically viable, the assembly and alignment must be automatic. Paniccia and his colleagues are currently developing automatic alignment methods by machining tiny bumps and grooves into the silicon.

With all the basic technologies that Paniccia defined years ago now under control, his group is moving away from demonstrating components towards putting them together in a single chip that is capable of transmitting a terabit (1012 bits) of information per second. "There is nothing sacred about a terabit," Paniccia says. "It is just a stake we have put into the ground for the time being." Intel's scientists may even have higher data rates in the backs of their minds.

So what might a terabit photonic chip look like? Paniccia envisions 25 of his hybrid silicon lasers on a single chip, each at a slightly different wavelength and each modulated at 40 Gbit/s. A silicon multiplexer would then combine all 25 signals into a single optical fibre. At the other end of the fibre, another chip would have 25 detectors to convert the optical signal back into an electronic one. "All the parts have been proven to work," Paniccia says. "Now it's just a matter of putting them all together."