A telescope that compresses light could speed up optical communication systems.

Cramming more light into a given space means that more data can be transmitted through optical fibres in less time. That's the theory behind the "time-domain telescope" which, according to researchers at Cornell University (Ithaca, NY), could one day yield record data rates for optical communications systems (Nature Photonics DOI:10.1038/NPHOTON.2009.169). 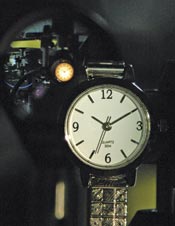 While a conventional spatial telescope is typically used to magnify far-away objects, it can also create a reduced image of an object that is very near. The time-domain analogue uses this reducing property to shrink optical waveforms, boosting the amount of data that can be sent through fibre-optic links.

"Using standard optoelectronic devices, we create optical waveforms at as high a speed as the optoelectronic components can operate," Mark Foster, a researcher at Cornell's School of Applied and Engineering Physics department, told optics.org. "These waveforms are then sent into the time-domain telescope and exact replicas emerge, but reduced in duration by the scaling factor of the telescope – in our case 27."

This approach could be used to compress the data passing through packet-based optical networks, the physical communication layer that underpins the Internet. In terms of data rates, the time-domain telescope could allow 27 times more information to be sent over the same wavelength channel. 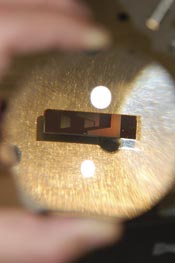 This nonlinear optical process is routinely used in optics to increase or decrease the frequency of an optical waveform or lightwave. "Four-wave mixing is essential to our device because it can impart changes at very high speeds – much faster than optoelectronic devices," commented Foster.

Foster and colleagues plan to commercialize their technology as well as other similar temporal imaging systems. In the meantime, the team plans to decrease the minimum feature size generated by the system by reducing the aberrations in the temporal lenses.