Demonstration is an early step towards a 'quantum switchboard' 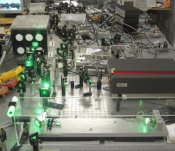 Qubits of many colours

Physicists in Brazil have added another capability to the quantum computing toolkit by being the first to show that light beams of three different wavelengths can be entangled. This achievement could provide a way to create three-way optical communication links between elements of a quantum computer.

Entanglement is a quantum effect that means that particles such as photons can have a much closer relationship than allowed by classical physics. For instance, two photons can be created experimentally such that if one is polarized in the vertical direction, then the other is always polarized horizontally. By measuring the polarization of one of the pair, we immediately know the state of the other, no matter how far apart they are.

A quantum computer exploits entanglement and the ability of quantum particles to be in "superposition" of two or more states at the same time. Such a device could, in principle, outperform a classical computer on some tasks. In practice, however, physicists have struggled to create even the simplest quantum computers because the fragile nature of entangled quantum bits – or qubits – makes them very difficult to transmit, store and process.

Photons are a popular choice for qubits because they can travel great distances through optical fibres or even air without losing their entanglement. However, in a quantum computer, such "flying qubits" must interact with "stationary qubits" such as trapped ions or quantum dots – and doing this without the destruction of quantum information is extremely tricky.

One could imagine having three different pieces of quantum hardware, for example, with qubits based on a quantum dot, an ion and superconducting flux, respectively. Exchanging quantum information among all of these devices at once requires a light source that can interact efficiently with each qubit, while at the same time produce light that is entangled.

One of the lead researchers – Paul Nussenzveig of the University of Sao Paulo – explains that that light beams could transfer information in such a quantum computing system by exploiting the fact that different types of qubits respond to light at different wavelengths.

But while entanglement of light at two different wavelengths had been achieved previously, increasing this to three – and ultimately four and more – is necessary if several different types of qubit are to be interconnected.

PhD students Antônio Coelho and Felippe Barbosa measured the entanglement produced when a green laser was shone at a system known as an optical parametric oscillator. When the light enters the crystal some of it is converted to two entangled beams at different infrared wavelengths – a phenomenon known as parametric down-conversion. As these beams oscillate within the system, some infrared light is "up-converted" back to green, resulting in entanglement between all three wavelengths.

To observe full entanglement between the three light beams they had to cool the system below –10 °C and restrict the pump laser to a narrow power range. Even with cooling, vibrations within the crystal caused minute variations in its refractive index, preventing the researchers from reaching the maximum level of entanglement that they predict could be achieved. That's an important consideration for quantum computing, Nussenzveig told our sister website physicsworld.com. "The efficiency of the information exchange depends on the degree of entanglement," he said.

Other leading figures performing research into quantum computation and quantum optics agree on the need for interconnections between qubits. "Research into providing seamless links between the physical systems that hold the promise of quantum computation is of significant importance," commented Ping Koy Lam from the Australian National University. "This work is a step towards providing that 'quantum' link."

Anton Zeilinger of the University of Vienna calls the kind of systems that the continuous variable entanglement demonstrated by the Brazilian team could produce "quantum switchboards". He says that their work in producing three-colour entanglement is "a very elegant experiment".

The research is described in Science.